In Rev. Rul. 78-330, the IRS concludes that the parent corporation's cancellation of the subsidiary's debt immediately prior to the statutory merger to another subsidiary has independent economic significance such that § 357(c) did not apply on these facts. (See §357(c)(1)(B) for current law.)
Start a Diagram 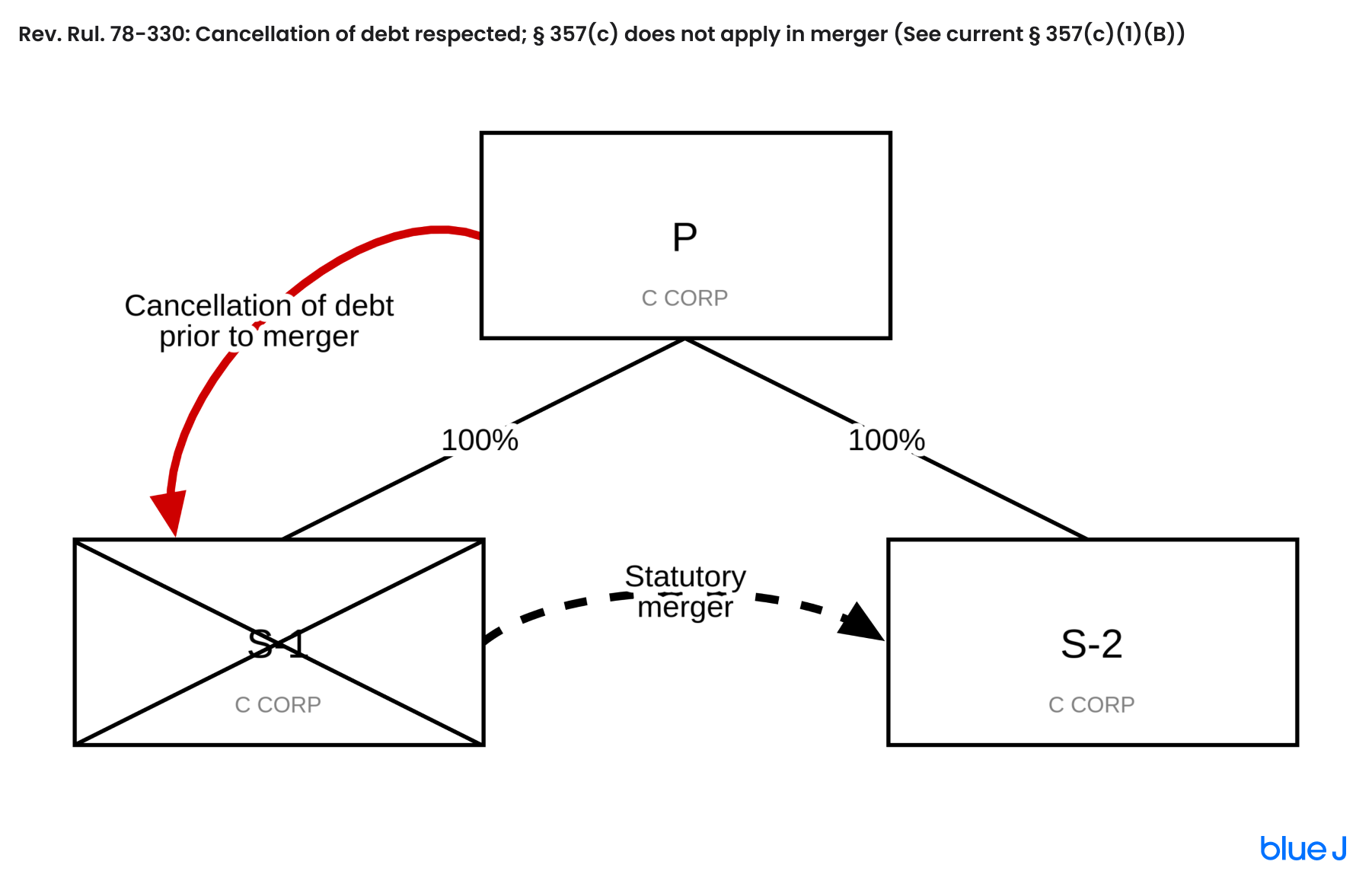 No items found.
Rev. Rul. 78-330: Cancellation of debt respected; § 357(c) does not apply in merger
In Rev. Rul. 78-330, the IRS concludes that the parent corporation's cancellation of the subsidiary's debt immediately prior to the statutory merger to another subsidiary has independent economic significance such that § 357(c) did not apply on these facts. (See §357(c)(1)(B) for current law.)

Corporation P owned all the stock of corporations S-1 and S-2. For valid business reasons the decision was made to combine S-1 and S-2 pursuant to a plan of reorganization under which S-1 transferred all its assets and liabilities to S-2 in a statutory merger pursuant to state law. As a preliminary step, P gratuitously cancelled the principal amount of a debt owed by S-1 to P so that the basis of S-1's assets would exceed the total amount of its liabilities prior to the reorganization. The debt had been incurred for valid business reasons and had been outstanding for a number of years prior to the reorganization.

If the sum of the amount of the liabilities assumed, plus the amount of the liabilities to which the property is subject, exceeds the total of the adjusted basis of the property transferred in the case of an exchange to which section 361 of the Code applies by reason of a plan of reorganization within the meaning of section 368(a)(1)(D), section 357(c)(1)(B) provides that the excess shall be considered as gain from the sale or exchange of a capital assets or of property that is not a capital asset, as the case may be.

In this case P's cancellation of S-1's obligation had independent economic significance because it resulted in a genuine alteration of a previous bona fide business relationship. In similar situations threshold transactions that demonstrate independent economic significance have been given substance for tax purposes. See Simpson v. Commissioner, 43 T.C. 900, 916 (1965), acq., 1965-2 C.B. 6, wherein the United States Tax Court acknowledged that a taxpayer-transferor in an incorporation under section 351 of the Code may take the preliminary steps necessary to arrange the transaction so as to avoid the effect of section 357(c) on an otherwise tax-free exchange. See also Rev. Rul. 77-227, 1977-2 C.B. 120; Rev. Rul. 76-223, 1976-1 C.B. 103; and Rev. Rul. 69-407, 1969-2 C.B. 50.

P's cancellation of the principal amount of the debt owed by S-1 to P will be given substance as a contribution by P to the capital of S-1. Section 357(c) of the Code will not apply to the subsequent merger transaction since the liabilities of S-1 assumed by S-2 did not exceed the adjusted basis of the S-1 assets transferred to S-2.