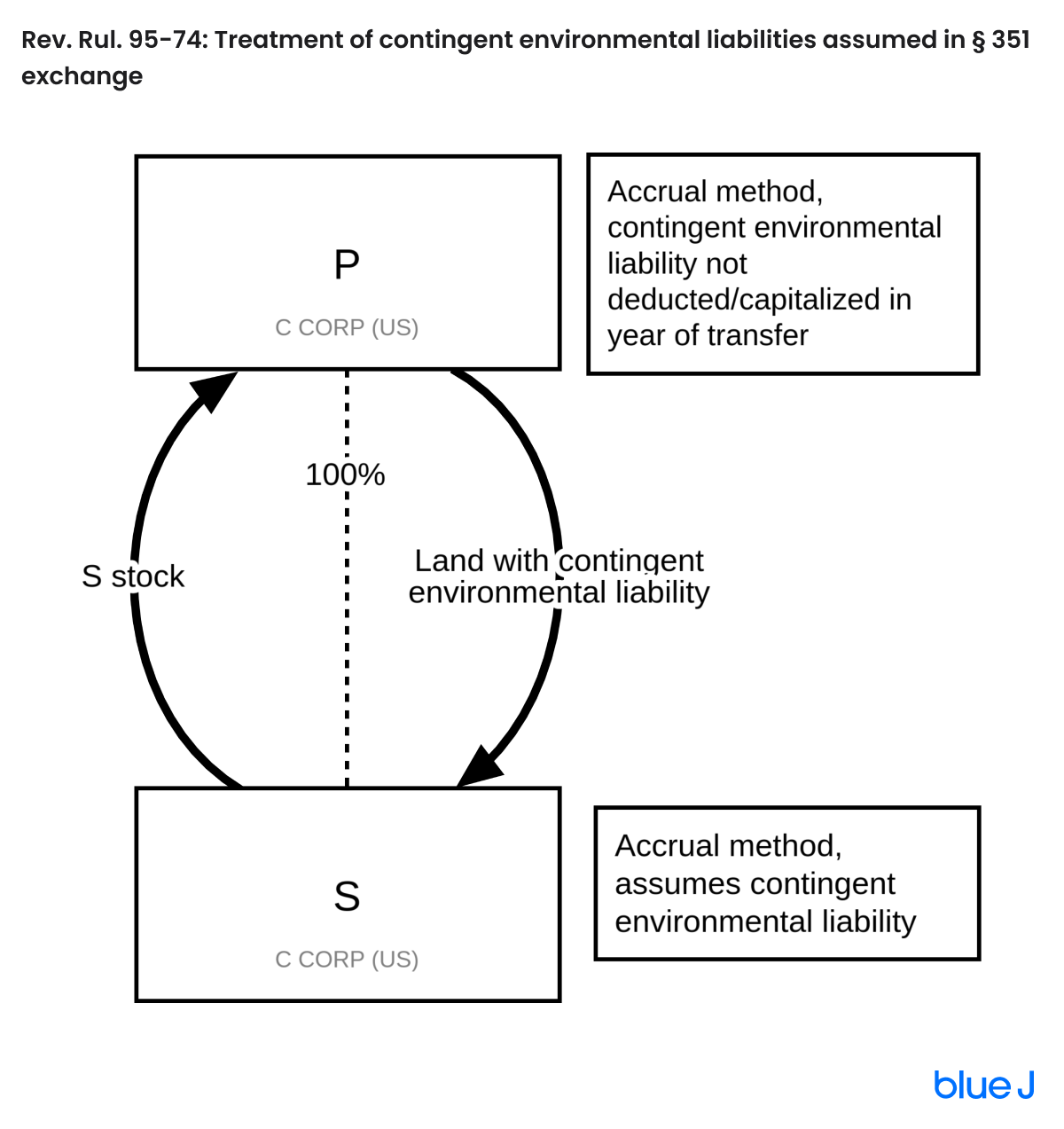 (1) Are the liabilities assumed by S in the section 351 exchange described below liabilities for purposes of sections 357(c)(1) and 358(d)?

(2) Once assumed by S, how will the liabilities in the section 351 exchange described below be treated?

Corporation P is an accrual basis, calendar-year corporation engaged in various ongoing businesses, one of which includes the operation of a manufacturing plant (the Manufacturing Business). The plant is located on land purchased by P many years before. The land was not contaminated by any hazardous waste when P purchased it. However, as a result of plant operations, certain environmental liabilities, such as potential soil and groundwater remediation, are now associated with the land.

In Year 1, for bona fide business purposes, P engages in an exchange to which section 351 of the Internal Revenue Code applies by transferring substantially all of the assets associated with the Manufacturing Business, including the manufacturing plant and the land on which the plant is located, to a newly formed corporation, S, in exchange for all of the stock of S and for S's assumption of the liabilities associated with the Manufacturing Business, including the environmental liabilities associated with the land. P has no plan or intention to dispose of (or have S issue) any S stock. S is an accrual basis, calendar-year taxpayer.

In Year 3, S undertakes soil and groundwater remediation efforts relating to the land transferred in the section 351 exchange and incurs costs (within the meaning of the economic performance rules of section 461(h)) as a result of those remediation efforts. Of the total amount of costs incurred, a portion would have constituted ordinary and necessary business expenses that are deductible under section 162 and the remaining portion would have constituted capital expenditures under section 263 if there had not been a section 351 exchange and the costs for remediation efforts had been incurred by P. See Rev. Rul. 94-38, 1994-1 C.B. 35 (discussing the treatment of certain environmental remediation costs).

Issue 1: Section 351(a) provides that no gain or loss shall be recognized if property is transferred to a corporation solely in exchange for stock and immediately after the exchange the transferor is in control of the corporation.

Section 357(a) provides a general rule that a transferee corporation's assumption of a transferor's liability in a section 351 exchange will not be treated as money or other property received by the transferor. Section 357(b) provides an exception to the general rule of section 357(a) when it appears that the principal purpose of the transferor in having the liability assumed was avoidance of Federal income tax on the exchange or, if not such purpose, was not a bona fide business purpose.

Section 357(c)(1) provides a second exception to the general rule of section 357(a). Section 357(c)(1) provides that if the sum of the liabilities the transferee corporation assumes and takes property subject to exceeds the total of the adjusted basis of the property the transferor transfers to the corporation pursuant to the exchange, then the excess shall be considered as gain from the sale or exchange of the property.

For purposes of applying the exception in section 357(c)(1), section 357(c)(3)(A) provides that a liability the payment of which would give rise to a deduction (or would be described in section 736(a)) is excluded. This special rule does not apply, however, to any liability to the extent that the incurrence of the liability resulted in the creation of, or an increase in, the basis of any property. Section 357(c)(3)(B).

The legislative history of section 351 indicates that Congress viewed an incorporation as a mere change in the form of the underlying business and enacted section 351 to facilitate such business adjustments generally by allowing taxpayers to incorporate businesses without recognizing gain. S. Rep. No. 398, 68th Cong., 1st Sess. 17-18 (1924); H.R. Rep. No. 350, 67th Cong., 1st Sess. 9-10 (1921); see also Rev. Rul. 94-45, 1994-2 C.B. 39 (providing for nonrecognition of gain from assumption reinsurance transactions that are undertaken as part of section 351 exchanges). Section 357(c)(1), however, provides that the transferor recognizes gain to the extent that the amount of liabilities transferred exceeds the aggregate basis of the assets transferred.

In this case, the contingent environmental liabilities assumed by S had not yet been taken into account by P prior to the transfer (and therefore had neither given rise to deductions for P nor resulted in the creation of, or increase in, basis in any property of P). As a result, the contingent environmental liabilities are not included in determining whether the amount of the liabilities assumed by S exceeds the adjusted basis of the property transferred by P pursuant to section 357(c)(1).

Due to the parallel constructions and interrelated function and mechanics of sections 357 and 358, liabilities that are not included in the determination under section 357(c)(1) also are not included in the section 358 determination of the transferor's basis in the stock received in the section 351 exchange. See Focht v. Commissioner, 68 T.C. 223 (1977); S. Rep. No. 1263, 95th Cong., 2d Sess. 183-85 (1978), 1978-3 C.B. 481-83. Therefore, the contingent environmental liabilities assumed by S are not treated as money received by P under section 358 for purposes of determining P's basis in the stock of S received in the exchange.

Issue 2: In Holdcroft Transp. Co. v. Commissioner, 153 F.2d 323 (8th Cir. 1946), the Court of Appeals for the Eighth Circuit held that, after a transfer pursuant to the predecessor to section 351, the payments by a transferee corporation were not deductible even though the transferor partnership would have been entitled to deductions for the payments had the partnership actually made the payments. The court stated generally that the expense of settling claims or liabilities of a predecessor entity did not arise as an operating expense or loss of the business of the transferee but was a part of the cost of acquiring the predecessor's property, and the fact that the claims were contingent and unliquidated at the time of the acquisition was not of controlling consequence.

In Rev. Rul. 80-198, 1980-2 C.B. 113, an individual transferred all of the assets and liabilities of a sole proprietorship, which included accounts payable and accounts receivable, to a new corporation in exchange for all of its stock. The revenue ruling holds, subject to certain limitations, that the transfer qualifies as an exchange within the meaning of section 351(a) and that the transferee corporation will report in its income the accounts receivable as collected and will be allowed deductions under section 162 for the payments it makes to satisfy the accounts payable. In reaching these holdings, the revenue ruling makes reference to the specific congressional intent of section 351(a) to facilitate the incorporation of an ongoing business by making the incorporation tax free. The ruling states that this intent would be equally frustrated if either the transferor were taxed on the transfer of the accounts receivable or the transferee were not allowed a deduction for payment of the accounts payable. See also Rev. Rul. 83-155, 1983-2 C.B. 38 (guaranteed payments to a retired partner made pursuant to a partnership agreement by a corporation to which the partnership had transferred all of its assets and liabilities in a section 351 exchange were deductible by the corporation as ordinary and necessary business expenses under section 162(a)).

The present case is analogous to the situation in Rev. Rul. 80-198. For business reasons, P transferred in a section 351 exchange substantially all of the assets and liabilities associated with the Manufacturing Business to S, in exchange for all of its stock, and P intends to remain in control of S. The costs S incurs to remediate the land would have been deductible in part and capitalized in part had P continued the Manufacturing Business and incurred those costs to remediate the land. The congressional intent to facilitate necessary business readjustments would be frustrated by not according to S the ability to deduct or capitalize the expenses of the ongoing business.

Therefore, on these facts, the Internal Revenue Service will not follow the decision in Holdcroft Transp. Co. v. Commissioner, 153 F.2d 323 (8th Cir. 1946). Accordingly, the contingent environmental liabilities assumed from P are deductible as business expenses under section 162 or are capitalized under section 263, as appropriate, by S under S's method of accounting (determined as if S has owned the land for the period and in the same manner as it was owned by P).

(1) The liabilities assumed by S in the section 351 exchange described above are not liabilities for purposes of section 357(c)(1) and section 358(d) because the liabilities had not yet been taken into account by P prior to the transfer (and therefore had neither given rise to deductions for P nor resulted in the creation of, or increase in, basis in any property of P).

(2) The liabilities assumed by S in the section 351 exchange described above are deductible by S as business expenses under section 162 or are capital expenditures under section 263, as appropriate, under S's method of accounting (determined as if S has owned the land for the period and in the same manner as it was owned by P).

The holdings described above are subject to section 482 and other applicable sections of the Code and principles of law, including the limitations discussed in Rev. Rul. 80-198, 1980-2 C.B. 113 (limiting the scope of the revenue ruling to transactions that do not have a tax avoidance purpose). See also Notice 95-53, 1995-44 I.R.B. 1 (discussing certain tax consequences of "stripping transactions," including the applicability of section 482). 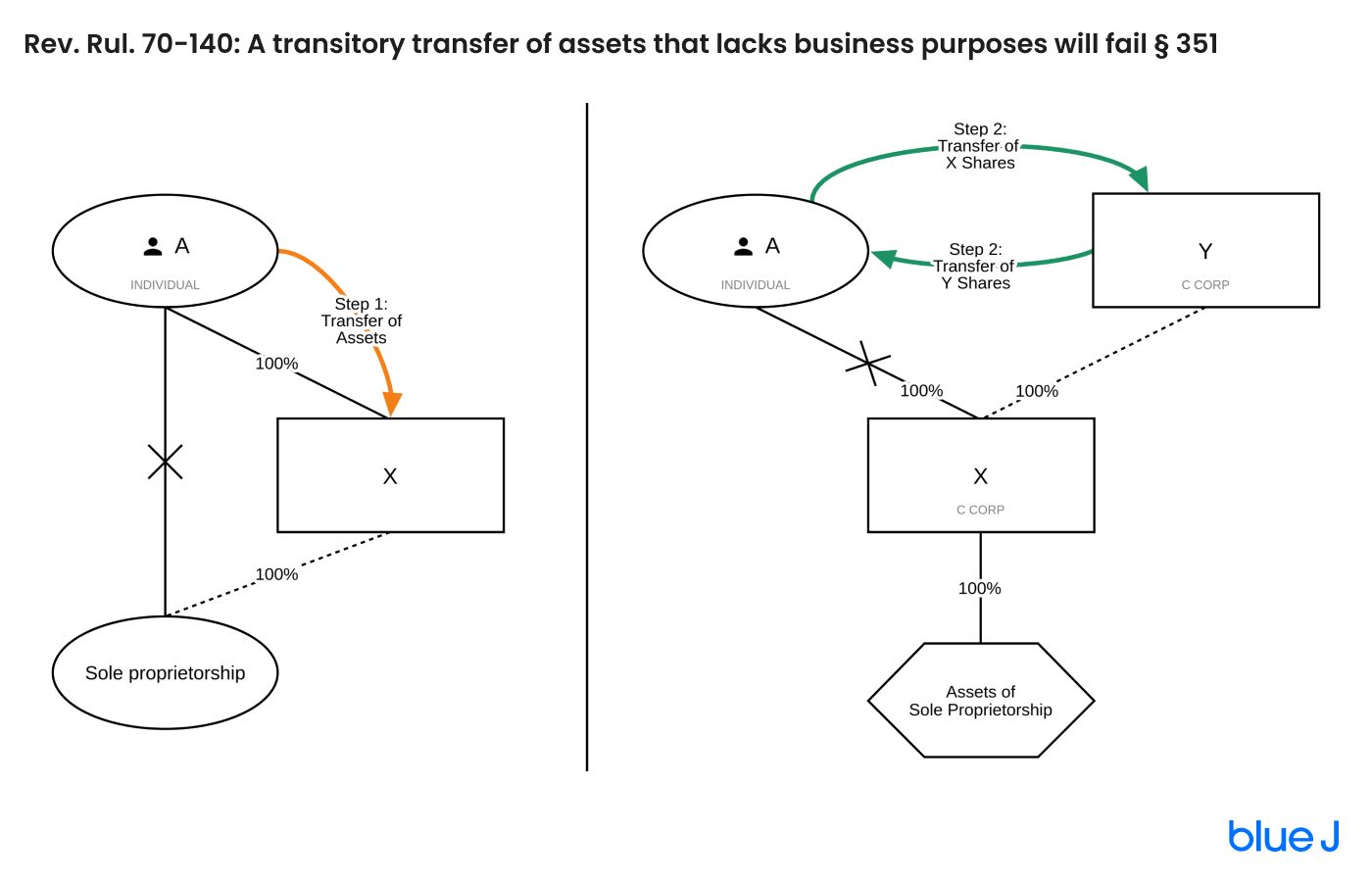 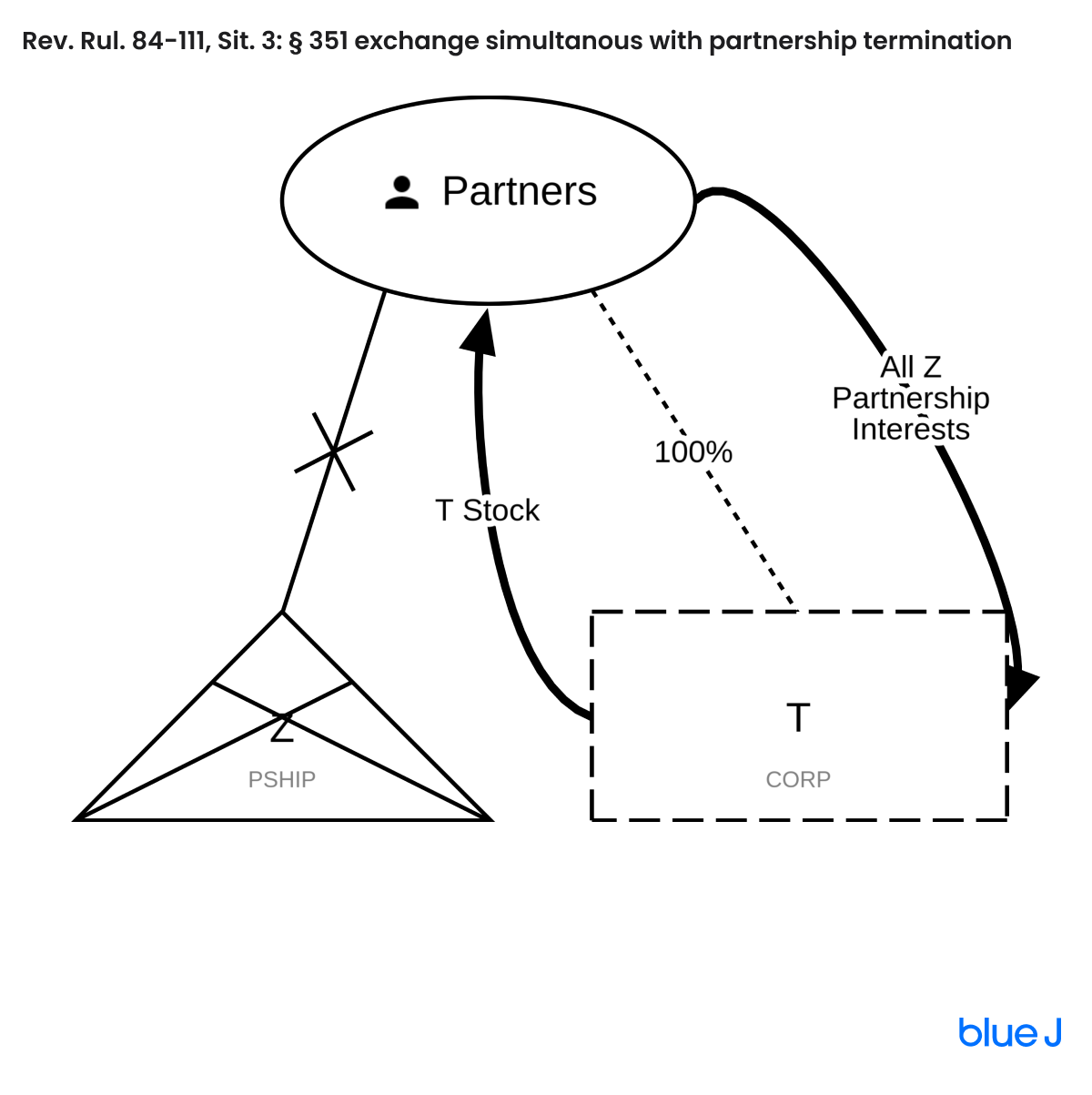 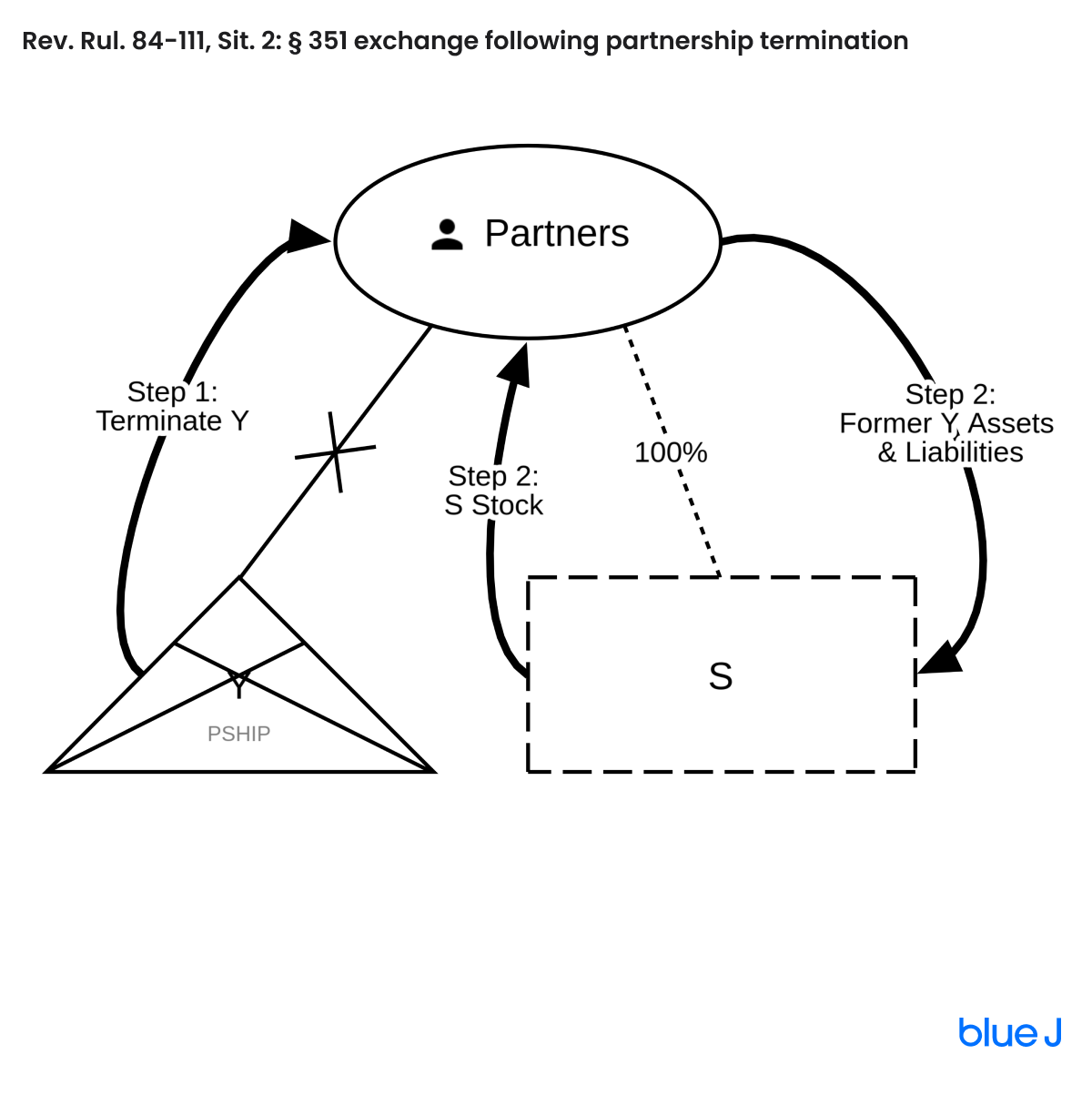 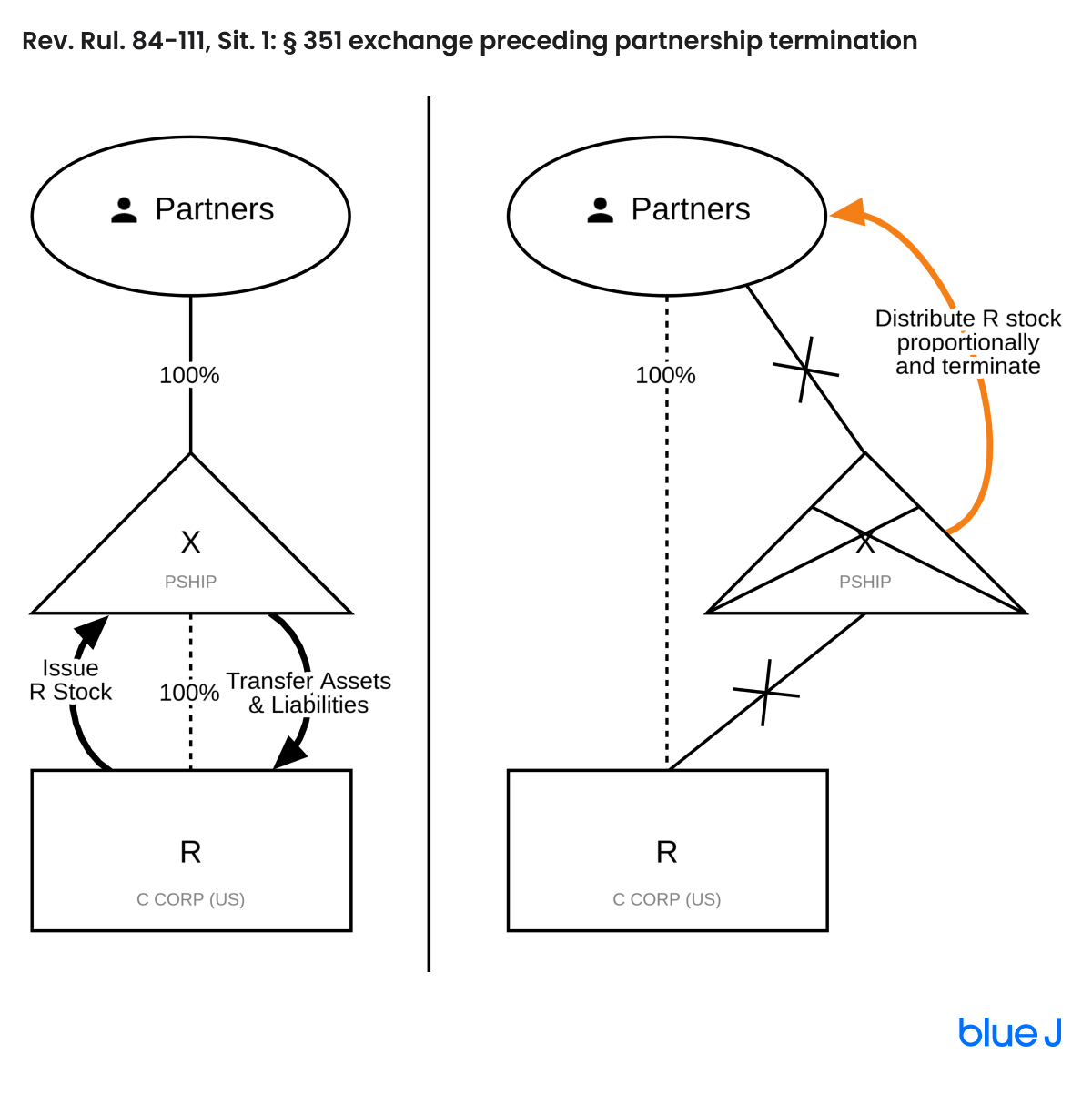