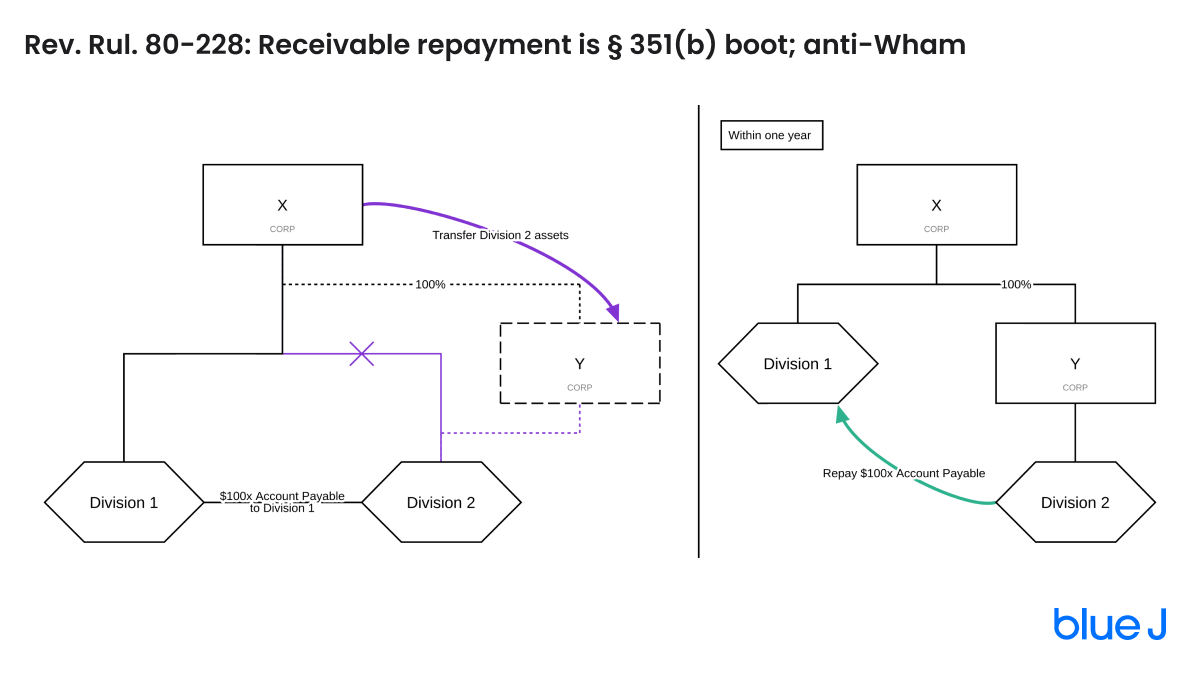 In the facts described below, did X corporation receive "other property" from Y corporation within the meaning of section 351(b) of the Internal Revenue Code?

X corporation operated its business in two entirely separate divisions ("Division 1" and "Division 2"), keeping a separate bank account and a separate set of books for each division. Each division also maintained an intracompany account in their respective books of account and transactions between the two divisions were recorded therein. For valid business reasons X organized a new corporation, Y. All the assets of Division 2 were transferred by X to Y at net book value in exchange for all of the stock of Y. At the time of the transfer, the intracompany account payable due to Division 1 from Division 2 was 100x dollars. On its opening balance sheet Y listed an account payable to X of 100x dollars and X, conversely, listed an account receivable from Y of 100x dollars. Within one year after the transfer the account payable of Y was paid in full to X.

The nonrecognition provisions of 351(a) of the Code provide that where property is transferred to a corporation by one or more persons solely in exchange for stock or securities in such corporation and immediately after the exchange such person or persons are in control of the corporation, no gain or loss is recognized in the transaction. If, however, in addition to stock or securities, "other property" is received by the transferor, the transferor must recognize gain on the exchange but not in excess of the fair market value of the "other property" received pursuant to section 351(b).

When Y was organized as a separate corporation, and an account payable from Y to X was established (and, correlatively, an account receivable was reflected by X on its books), a real liability on the part of Y (and a real asset on the part of X) came into being. The intracompany account payable (and the intracompany account receivable) did not simply "carry over" to the books of Y. Instead, X received something other than merely the stock of Y.

In the instant case the account receivable to X from Y was a note or other evidence of indebtedness received by X in a section 351 transaction and it constituted "other property" for purposes of section 351(b) of the Code. This is due to the fact that the preincorporation intracompany accounts could not have given rise to a debtor-creditor relationship between X and Y because X could not, prior to incorporation of Y, have been liable for a debt to itself. The intracompany accounts were mere bookkeeping entries by X, a single corporation, to show the activities of separate divisions for internal accounting purposes.

Consequently, the Internal Revenue Service will not follow the decision of the United States Court of Appeals for the Fourth Circuit in Wham.

X did receive "other property" in the form of the 100x dollar account receivable and, pursuant to section 351(b) of the Code, must recognize gain in that amount.