In Rev. Rul. 83-156, the IRS held that in a transfer of assets to a subsidiary followed by a contribution of those same assets to a newly formed partnership the requirements of § 351 and § 721 were satisfied.
Start a Diagram 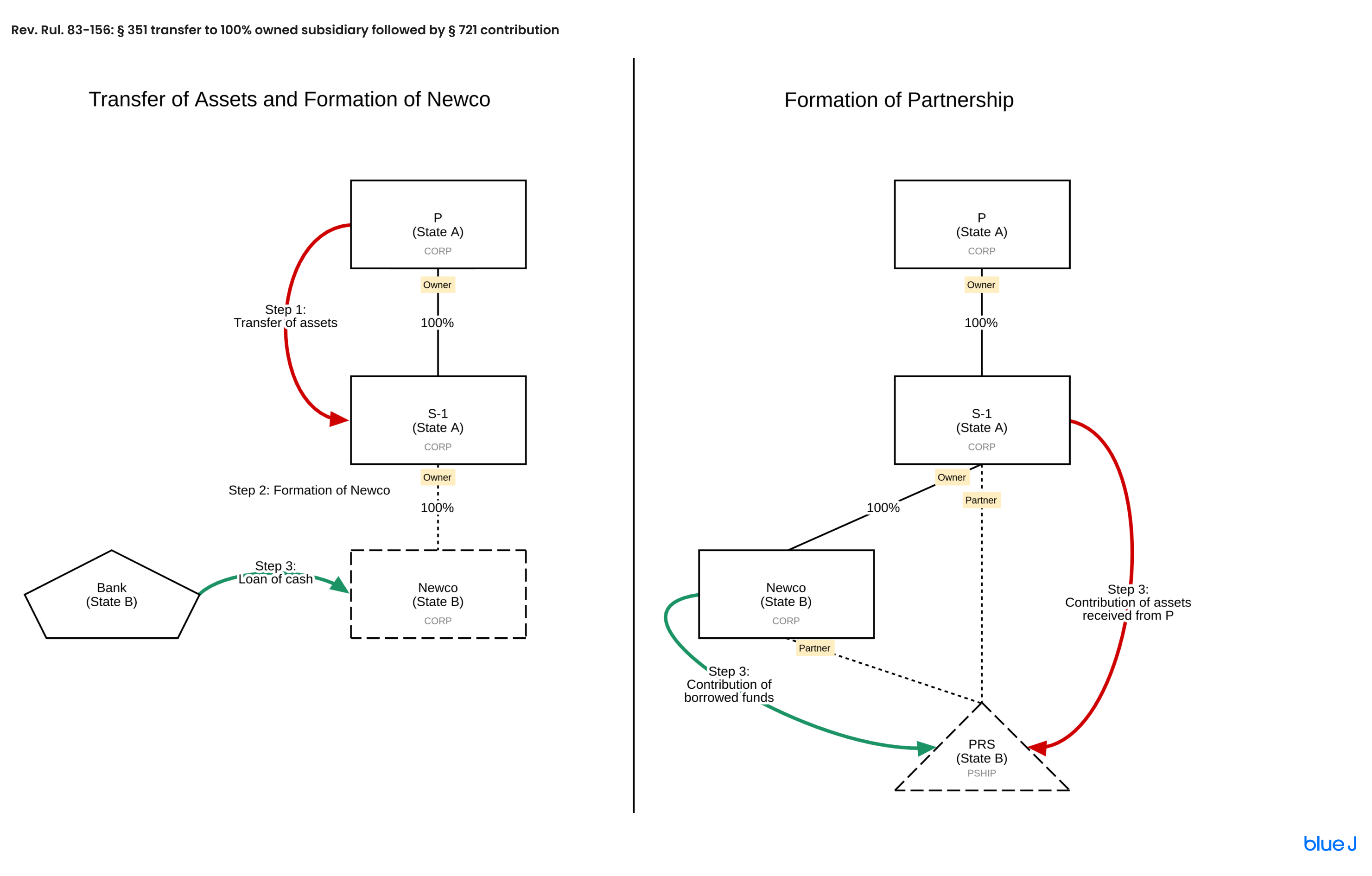 Whether the transfer of assets by P to its wholly owned subsidiary (S-1), which in turn transfers the assets to a partnership in which S-1 will be a partner, is governed by section 351 of the Internal Revenue Code. FACTS

P corporation and its wholly owned subsidiary, S-1, are incorporated in state A. State A has advantageous corporate laws. P transferred to S-1 certain property with which S-1 set up a branch operation in state B. No liabilities of P were assumed by S1 and the assets transferred were not subject to liabilities. In order for the branch operation to avail itself of financing at favorable interest rates under the laws of state B, S-1 formed a new corporation (Newco) in state B. Newco borrowed the necessary operating funds from a bank in state B. Then, as part of the same plan, Newco and S-1 established a partnership (PRS) formed under a statute of state B corresponding to the Uniform Partnership Act, to which Newco contributed the borrowed funds and S-1 contributed the assets it received from P. PRS conducted the business of the state B branch operation under the sole management of S-1.

Section 3 5 1 (a) of the Code provides that no gain or loss will be recognized if property is transferred to a corporation by one or more persons solely in exchange for stock or securities in such corporation, and immediately alter the exchange such person or persons are in control (as defined in section 368(c)) of the corporation. Section 368(c) defines the term "control" to mean the ownership of stock possessing at least 80 percent of the that combined voting power of all classes of stock entitled to vote and at least s 80 percent of the total number of snares of all other classes of stock of the corporation.

In Rev. Rul. 77-449, 1977-2 C.B. 1 10, a corporation transferred assets to a wholly owned subsidiary, which in turn transferred, as part of the same plan, the same assets to its own wholly owned subsidiary. The transfers were viewed as separate transactions, each of which satisfied the requirements of section 351 of the Code. Under the circumstances described above, the transfers are also viewed separately.

EFFECT ON OTHER DOCUMENTS