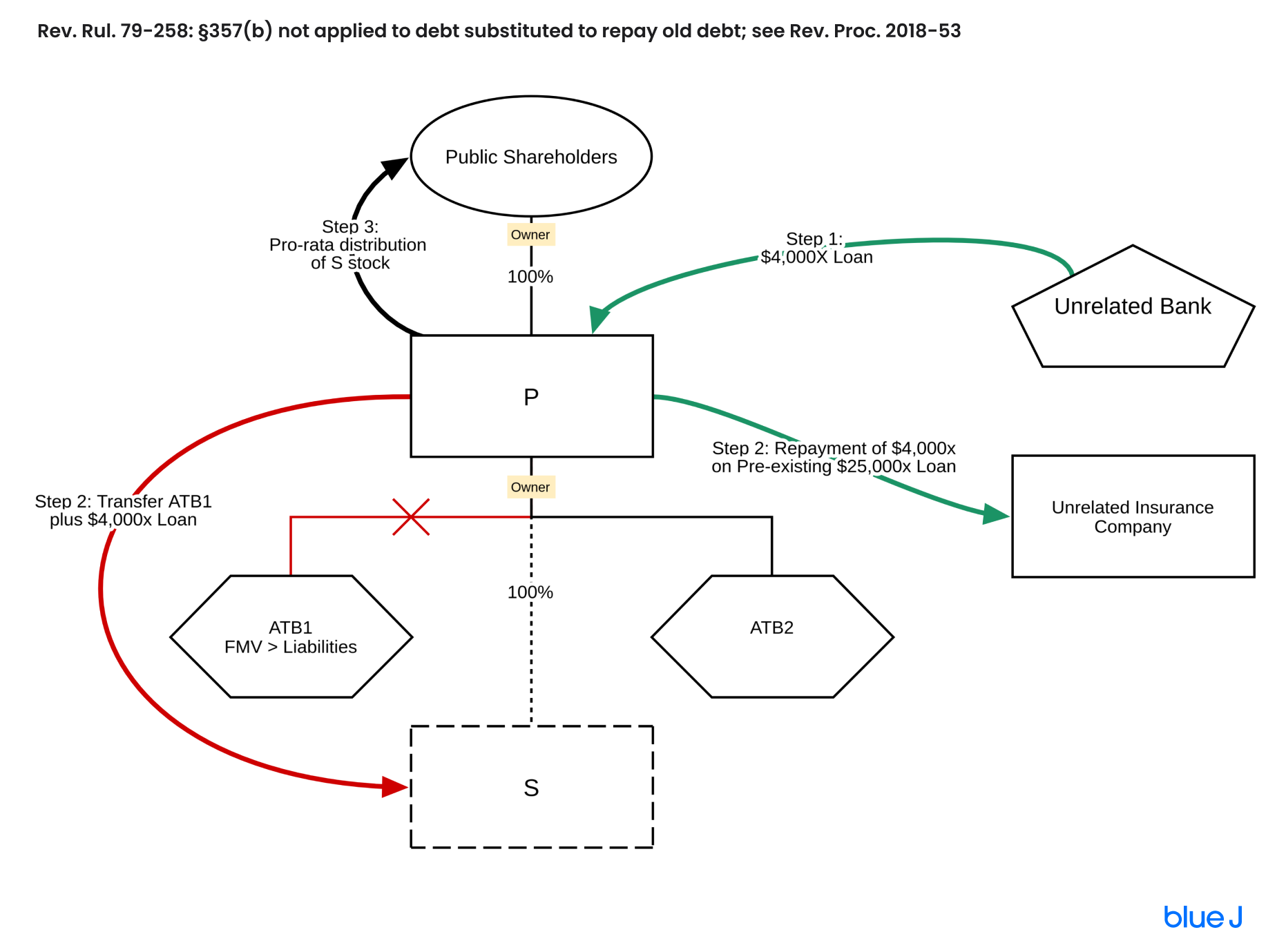 Corporation P, the stock of which is widely held, has been actively engaged in two separate businesses for more than 5 years. For good business reasons, P transferred the assets of one of its businesses to a newly formed subsidiary corporation, S, solely in exchange for all of the S stock and the assumption by S of the liabilities of P relating to the business transferred. Thereafter, P intended to distribute all the stock of S to the shareholders of P in a transaction that qualified under sections 368(a)(1)(D) and 355(a)(1) of the Code. The adjusted basis and the fair market value of the assets to be transferred by P to S, in the aggregate, exceeded the amount of the liabilities assumed by S. One of the liabilities P desired S to assume was a 4,000x dollar portion of a 25,000x dollar long-term debt to an insurance company that had been incurred by P in connection with the business transferred to S and had been outstanding for several years. P and S would be unable to apportion this debt, however, because the insurance company refused to relieve P of its primary liability for the repayment of the loan. From P's standpoint it was desirable to have S assume this 4,000x dollar liability, otherwise P would be reducing its assets by the amount of the value of the S stock, which was to be distributed to the P shareholders, without a reduction of its liabilities by the amount of the 4,000x dollar liability attributable to the business transferred to S. Thus, if S did not assume the 4,000x dollar liability, it could adversely affect P's future ability to borrow and its ability to pay off the portion of the indebtedness because of its disposition of the business transferred to S.

Section 357(a) of the Code provides, in part, that, except as provided in section 357(b) and (c), if (1) the taxpayer receives property that would be permitted to be received under section 361 without the recognition of gain if it were the sole consideration, and (2) as part of the consideration, another party to the exchange assumes a liability of the taxpayer, or acquires from the taxpayer property subject to a liability, then such assumption or acquisition shall not be treated as money or other property, and shall not prevent the exchange from being within the provisions of section 361.

Section 357(b)(1) of the Code provides, in part, that if, taking into consideration the nature of the liability and the circumstances in the light of which the arrangement for the assumption or acquisition was made, it appears that the principal purpose of the taxpayer with respect to the assumption or acquisition described in section 357(a) was a purpose to avoid federal income tax on the exchange, or if not such purpose, was not a bona fide business purpose, then such assumption or acquisition (in the total amount of the liabilities assumed or acquired pursuant to such exchange) shall, for the purposes of section 361 be considered as money received by the taxpayer in the exchange.

Section 357(b)(1) of the Code applies in two cases: (1) where under the applicable circumstances it appears that the principal purpose of the transferor in causing the assumption of the liability was to avoid federal income tax on the exchange; and (2) where there is no tax avoidance purpose but the assumption was not effected for a bona fide business purpose.

Section 357(b) deals with the transferor's purpose in causing the assumption and by stating that consideration must be given to "the nature of the liability and the circumstances in the light of which the arrangement for the assumption acquisition was made", requires that the determination of the transferor's purpose be made from an analysis of all of the facts and circumstances. See Simpson v. Commissioner, 43 T.C. 900, 916 (1965), acq., 1965-2 C.B. 6, wherein the court stated: "* * * we believe the indictment of this section is limited to transactions of this nature arranged primarily so that the assumption of the transferee's liability in the transaction itself results in tax avoidance for the transferor, or has no bona fide business purpose. We do not believe it was intended to require recognition of gain on bona fide transactions designed to rearrange one's business affairs in such a manner as to minimize taxes in the future, consistent with existing provisions of the law."

The assumption of the liabilities of the transferor corporation is frequently an integral part of a corporate reorganization. This was recognized by Congress when it amended section 112 of the Internal Revenue Code of 1939 by amending subsection (k), the predecessor to section 357(b) of the Internal Revenue Code of 1954. The report of the House Ways and Means Committee accompanying the enactment of section 112(k) stated: "In typical transactions changing the form or entity of a business it is not customary to liquidate the liabilities of the business and such liabilities are almost invariably assumed by the corporation which continues the business." See H. Rep. No. 855, 76th Cong., 1st Sess., pp. 18, 19 (1939), 1939-2 C.B. 504.

Moreover, the acquisition of the new indebtedness by P and its assumption by S will not be viewed for federal income tax purposes as if S had obtained the new indebtedness and transferred the proceeds of the loan to P. In this regard it is immaterial that P and S may have been able to arrange their affairs in another manner. See Simpson v. Commissioner and ISC Industries Inc. v. Commissioner.

Based on all the facts and circumstances, section 357(b) of the Code does not apply to the assumption, and no gain or loss is recognized to P on the exchange with S under section 361(a).