In Rev. Rul. 76-385, the IRS concluded that § 302(b)(1) applied to a stock redemption because the interest in the redeeming corporation was not terminated due to the application of the constructive ownership rule in § 318(a)(3)(C) and the ownership reduction was negligible.
Start a Diagram 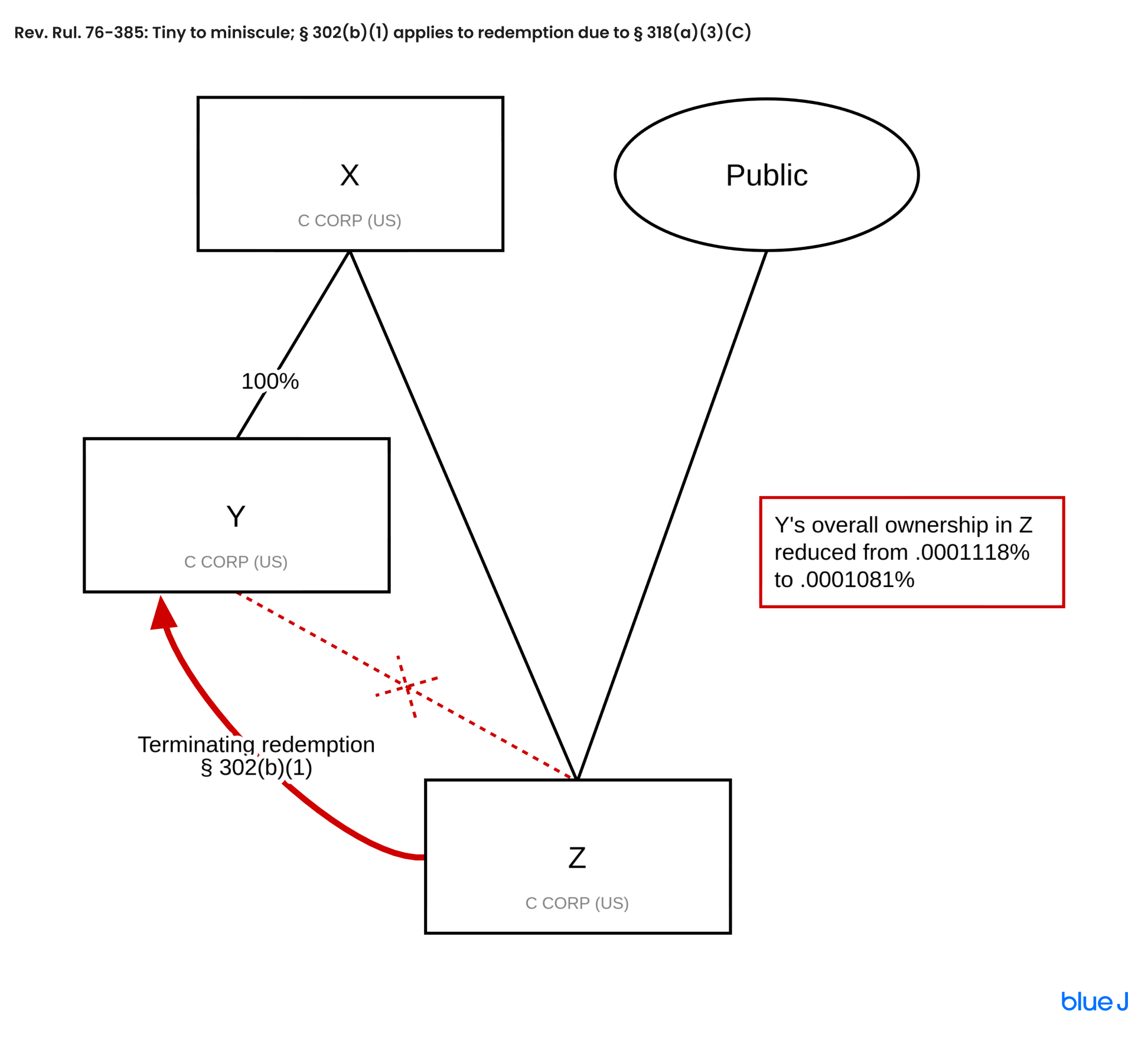 No items found.
Rev. Rul. 76-385: Tiny to miniscule redemption; §318(a)(3)(C)
In Rev. Rul. 76-385, the IRS concluded that § 302(b)(1) applied to a stock redemption because the interest in the redeeming corporation was not terminated due to the application of the constructive ownership rule in § 318(a)(3)(C) and the ownership reduction was negligible.

Advice has been requested whether, under the circumstances described below, a redemption of stock was a redemption that was not essentially equivalent to a dividend under section 302(b)(1) of the Internal Revenue Code of 1954.

Pursuant to a settlement of Federal antitrust litigation, Z agreed to divest itself of certain property owned by it. In accordance with this agreement, Z offered to distribute the property to its shareholders in redemption of shares of their Z stock. The offer was accepted by a portion of the Z shareholders, including Y. However, X did not accept the offer. In redemption of Y's stock in Z, Z distributed to Y a portion of the property required to be divested with a fair market value equal to the fair market value of the Z stock surrendered by Y. Although the redemption terminated Y's actual ownership of stock of Z, Y still is considered as owning the Z stock owned by X after the redemption through the application of the constructive ownership of stock rules of section 318(a)(3)(C) of the Code, which section 302(c) makes applicable to section 302. Thus, when the stock constructively owned by Y is considered, calculations indicate that the redemption reduced Y's percentage of ownership of the stock of Z from .0001118 percent to .0001081 percent. Based on this reduction, the percentage of stock of Z owned by Y after the redemption was 96.7 percent of the percentage of stock owned by Y before the redemption.

Section 302(a) of the Code provides, in part, that if a corporation redeems its stock, and if section 302(b)(1), (2), or (3) applies, such redemption will be treated as a distribution in part or full payment in exchange for the stock.

The question whether a distribution in redemption of stock of a shareholder is not essentially equivalent to a dividend under section 302(b)(1) depends upon the facts and circumstances of each case.

In United States v. Davis, 397 U.S. 301 (1970), rehearing denied, 397 U.S. 1071 (1970), 1970-1 C.B. 62, the Supreme Court of the United States held that a redemption must result in a meaningful reduction of the shareholder's proportionate interest in the corporation in order to qualify as not essentially equivalent to a dividend within the meaning of section 302(b)(1) of the Code and that the business purpose of the redemption is irrelevant to this determination. The Supreme Court further held that section 318(a) applies for the purpose of determining whether a distribution is "not essentially equivalent to a dividend" under section 302(b)(1).

One purpose for the enactment of section 302(b)(1) of the Code was to provide capital gain treatment for redemptions of stock held by certain minority shareholders, especially minority holders of preferred stock who exercise no control over corporate affairs. See S. Rep. No. 1622, 83rd Cong., 2d Sess., 44-45 (1954).

The redemption in the instant case falls within the category of redemptions Congress intended to exclude from dividend treatment through the enactment of section 302(b)(1) of the Code since the redemption involves a minority shareholder whose relative stock interest in Z is minimal and who exercises no control over the affairs of Z. In addition, as a result of the redemption, Y experienced a reduction of its voting rights, its right to participate in current earnings and accumulated surplus, and its right to share in net assets on liquidation. Thus, under the facts and circumstances of the instant case, the redemption qualifies under section 302(b)(1).