In Rev. Rul. 75-493, the IRS concludes that § 301 applies to a cash distribution to the seller undertaken before the acquiring corporation is under any legal obligation to purchase the shares of the target corporation.
Start a Diagram 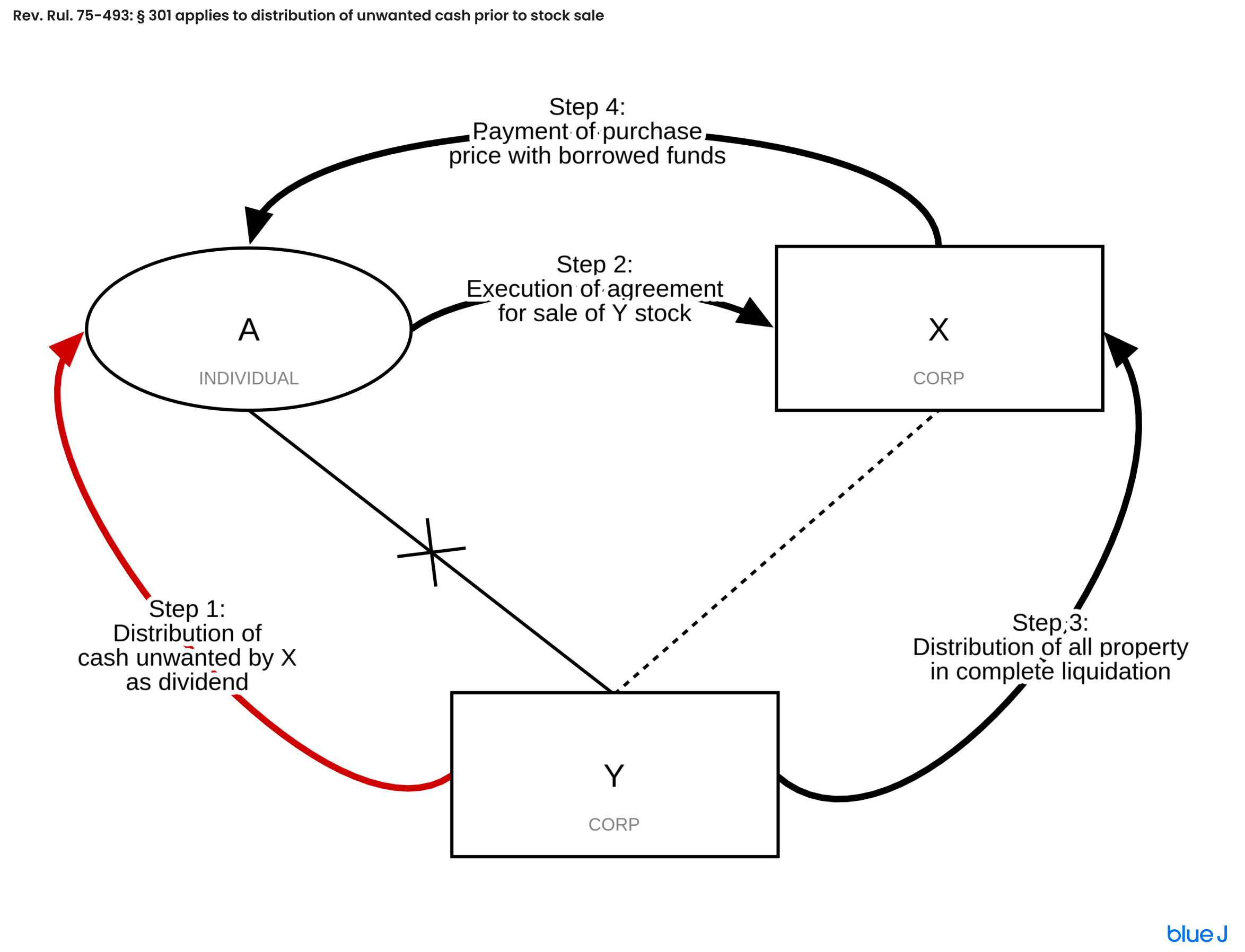 Advice has been requested whether the provisions of section 301 of the Internal Revenue Code of 1954 apply to the distribution of property described below.

A, an individual, owned all of the stock of Y corporation. X corporation entered into negotiations with A to buy for cash all of the stock of Y. In negotiating the purchase price of the Y stock, X stated that it did not want to purchase, in effect, the large amount of cash held by Y. A then offered to have Y distribute the cash to A with the understanding that X would then buy the Y stock. On November 1, 1974, Y declared and paid a cash dividend of the unwanted cash to A who surrendered no stock. At that time, X was under no legal obligation to purchase A's Y stock. Y had earnings and profits in excess of the amount of the distribution. On November 2, 1974, A and X executed an agreement for the sale of the Y stock to X for a fixed dollar amount. Pursuant to the agreement X acquired all of A's stock in Y and designated new officers and directors of Y who adopted a formal plan of complete liquidation of Y pursuant to which all of the property of Y was distributed to X in complete cancellation and redemption of the stock of Y. After the liquidation of Y, X paid A the agreed price of the Y stock with funds borrowed from an unrelated lender.

Section 1.61-9(c) of the Income Tax Regulations provides, in part, that when stock is sold after the declaration of a dividend and after the date as of which the seller becomes entitled to the dividend, the dividend ordinarily is income to the seller.

Section 331(a)(1) of the Code provides that amounts distributed in complete liquidation of a corporation will be treated as in full payment in exchange for the stock.

The payment of the dividend in the instant case did not reduce X's obligation to pay the agreed upon purchase price. Thus, the distribution cannot be considered a part of the purchase price paid by X to A for the Y stock. Moreover, since A was not the owner of any Y stock on the date of the adoption of the plan of liquidation of Y, the distribution cannot be considered as received by A in complete liquidation of Y.

Accordingly, the distribution is taxable to A under section 301 of the Code.

The facts of the instant case are distinguishable from Waterman Steamship Corporation v. Commissioner, 430 F.2d 1185 (5th Cir. 1970), cert. denied, 401 U.S. 939 (1970). In Waterman, an unrelated party agreed to purchase the stock of two subsidiaries of Waterman. One subsidiary declared a dividend in the form of a promissory note to Waterman. One hour later, Waterman sold the stock in both subsidiaries to the buyer who then loaned funds to the subsidiary declaring the dividend for the purpose of paying the note. The subsidiary then issued a check to Waterman in payment of the note. Because the funds to pay the dividend were actually furnished by the buyer, that amount was considered as party of the purchase price paid by the buyer for the stock of the subsidiary. Thus, the form of the transaction was a sham designed to disguise the true substance of the transaction.

Furthermore, the Service will not follow the decision in Casner v. Commissioner, 450 F. 2d 379 (5th Cir. 1971). In Casner, the court concluded, on the basis of facts similar to those in the instant case, that the pro rata payment of unwanted cash dividends to selling shareholders by their corporations prior to the signing of any binding stock purchase contracts constituted dividends to the buyer followed by the payment of the dividend amounts by the buyer to the selling shareholders as additional purchase price for the stock involved.