In Rev. Rul. 70-240, the combined steps of a sale of operating assets from a controlled corporation to its sister corporation and the following liquidation qualify as an all-cash “D” reorganization.
Start a Diagram 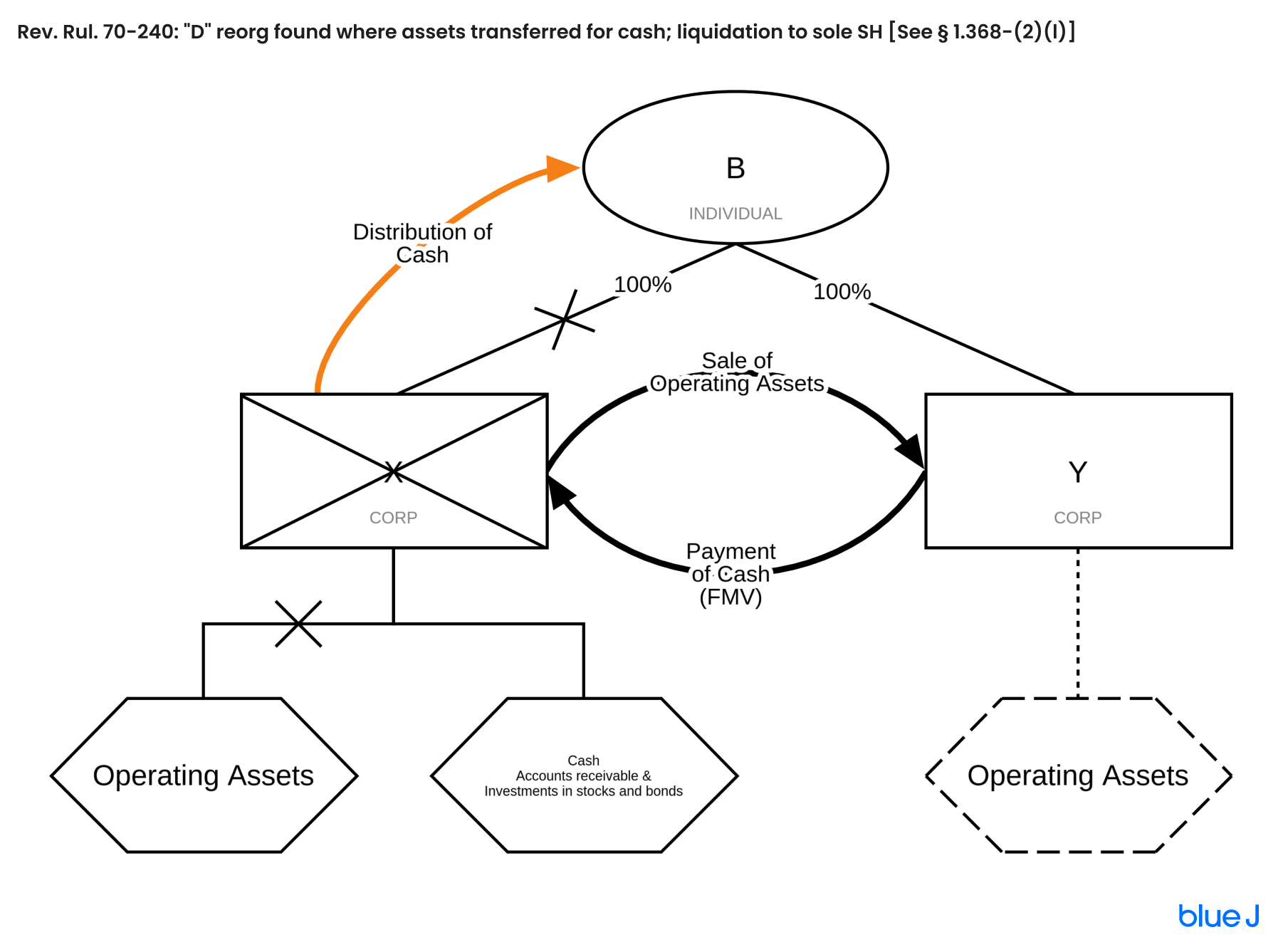 No items found.
Rev. Rul. 70-240: All-cash D reorg
In Rev. Rul. 70-240, the combined steps of a sale of operating assets from a controlled corporation to its sister corporation and the following liquidation qualify as an all-cash “D” reorganization.

Advice has been requested whether the amount distributed to the shareholder in the transaction described below is a distribution in liquidation of a corporation to which section 331 of the Internal Revenue Code of 1954 applies or whether such amount is a distribution that is taxable to the shareholder as provided in section 356(a) of the Code as other property received in an exchange to which section 368(a)(1) of the Code applies.

B owned all the stock of both the X corporation and the Y corporation each of which had been engaged in business for many years. X sold its operating assets to Y for 34x dollars (their fair market value). The remaining assets of X, which had a fair market value of 33x dollars, consisted generally of cash, accounts receivable, and investments in stocks and bonds. Following this sale, X paid its debts, which amounted to 38x dollars, and liquidated. B received in exchange for his X stock (2x dollar basis), a liquidating distribution of 29x dollars. Y continued to operate the business formerly conducted by X, in addition to its own existing business.

Section 331 of the Code provides that amounts distributed in complete liquidation of a corporation will be treated as in full payment in exchange for the stock.

Section 1.331-1(c) of the Income Tax Regulations provides that a liquidation which is followed by a transfer to another corporation of all or part of the assets of the liquidating corporation or which is preceded by such a transfer may, however, have the effect of the distribution of a dividend or of a transaction in which no loss is recognized and gain is recognized only to the extent of "other property."

Under section 356(a)(2) of the Code, a distribution pursuant to a reorganization is taxable as a dividend from the distributing corporation to the extent of each shareholder's "ratable share of the undistributed earnings and profits of the corporation accumulated after February 28, 1913." Where, as here, there is complete shareholder identity both corporations will be considered "distributing" corporations, for purposes of determining whether a distribution has the effect of a dividend. See J. E. Davant, et al. v. Commissioner 366 F. 2d 874 (1966), certiorari denied 386 U.S. 1022 (1967).