In Rev. Rul. 57-518, the IRS holds that the retention of assets for paying off a transferee corporation’s liabilities after an otherwise qualifying Type C reorganization does not disqualify the transaction from meeting the “substantially all” requirement of § 368(a)(1)(C).
Start a Diagram 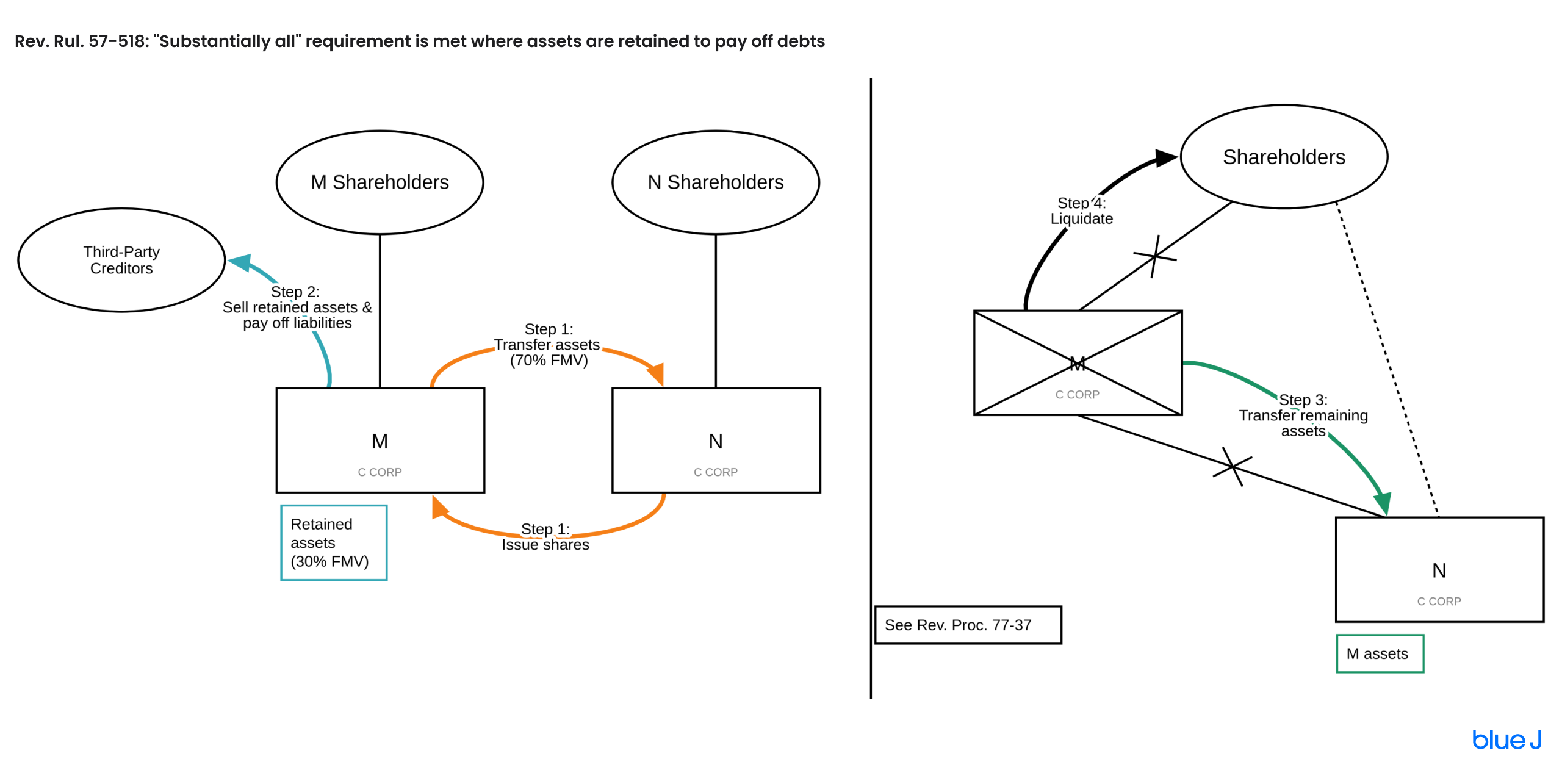 No items found.
Rev. Rul. 57-518: Sub-all and retained assets for debt repayment
In Rev. Rul. 57-518, the IRS holds that the retention of assets for paying off a transferee corporation’s liabilities after an otherwise qualifying Type C reorganization does not disqualify the transaction from meeting the “substantially all” requirement of § 368(a)(1)(C).

Advice has been requested as to the Federal income tax consequences of a reorganization between two corporations under the circumstances described below.

The M and N corporations were engaged in the fabrication and sale of various items of steel products. For sound and legitimate business reasons, N corporation acquired most of M corporation's business and operating assets. Under a plan of reorganization, M corporation transferred to N corporation (1) all of its fixed assets (plant and equipment) at net book values, (2) 97 percent of all its inventories at book values, and (3) insurance policies and other properties pertaining to the business. In exchange therefor, N corporation issued shares of its voting common stock to M corporation.

Section 368 of the Internal Revenue Code of 1954, in defining corporate reorganizations, provides in part:

The specific question presented is what constitutes `substantially all of the properties' as defined in the above section of the Code. The answer will depend upon the facts and circumstances in each case rather than upon any particular percentage. Among the elements of importance that are to be considered in arriving at the conclusion are the nature of the properties retained by the transferor, the purpose of the retention, and the amount thereof. In Milton Smith, et al. v. Commissioner , 34 B.T.A. 702, acquiescence, page 7, this Bulletin, withdrawing nonacquiescence, C.B. XV-2, 46 (1936), a corporation transferred 71 percent of its gross assets. It retained assets having a value of $52,000, the major portion of which was in cash and accounts receivable. It was stated that the assets were retained in order to liquidate liabilities of approximately $46,000. Thus, after discharging its liabilities, the outside figure of assets remaining with the petitioner would have been $6,000, which the court stated was not an excessive margin to allow for the collection of rereceivables with which to meet its liabilities. No assets were retained for the purpose of engaging in any business or for distribution to stockholders. In those circumstances, the court held that there had been a transfer of `substantially all of the assets' of the corporation. The court very definitely indicated that a different conclusion would probably have been reached if the amount retained was clearly in excess of a reasonable amount necessary to liquidate liabilities. Furthermore, the court intimated that transfer of all of the net assets of a corporation would not qualify if the percentage of gross assets transferred was too low. Thus, it stated that, if a corporation having gross assets of $1,000,000 and liabilities of $900,000 transferred only the net assets of $100,000, the result would probably not come within the intent of Congress in its use of the words `substantially all.'

The instant case, of the assets not transferred to the corporation, no portion was retained by M corporation for its own continued use inasmuch as the plan of reorganization contemplated M's liquidation. Furthermore, the assets retained were for the purpose of meeting liabilities, and these assets at fair market values, approximately equaled the amount of such liabilities. Thus, the facts in this case meet the requirements established in the case of Milton Smith, supra .

The instant case is not in conflict with I.T. 2373, C.B. VI-2 19 (1927), which holds that, where one corporation transferred approximately three-fourths of its properties to another corporation for a consideration of bonds and cash, it did not dispose of `substantially all the properties' owned by it at the time and, therefore, no corporate reorganization took place, so that the transaction constituted an exchange of property resulting in a gain or loss to the transferor for income tax purposes. I.T. 2372, supra , is obsolete to the extent that it implies that a corporate reorganization could have occurred where there was no continuity of interest. However, that ruling is still valid with regard to its discussion of the question of what constitutes `substantially all of the properties.' From the facts as stated in that case, it appears that a major part of the 25 percent of the assets retained were operating assets, and it does not appear that they were retained for the purpose of liquidating the liabilities of the corporation. On the contrary, it seems likely that the corporation may have contemplated continuation of its business or the sale of the remainder of its operating assets to another purchaser. As a result, I.T. 2373, supra , is clearly distinguishable from the instant case.

Accordingly, since the assets transferred by M to N constitute `substantially all' of the assets of the transferor corporation within the meaning of that statutory phrase, the acquisition by N corporation, in exchange solely for part of its voting common stock, of the properties of M corporation pursuant to the plan will constitute a reorganization within the purview of section 368(a)(1)(C) of the Code. No gain or loss is recognized to the transferor as a result of the exchange of its property for common stock of the transferee under section 361 of the Code; and no gain or loss is recognized to the shareholders of M corporation, under section 354(a)(1) of such Code, as the result of their receipt of N common stock.