In Gregory v. Helvering, 69 F.2d 809 (1935), the Supreme Court held against a taxpayer in a purported reorganization (spin-off under former Code) due to lack of business purpose, noting that the transaction was "in fact an elaborate and devious form of conveyance masquerading as a corporate reorganization, and nothing else."
Start a Diagram 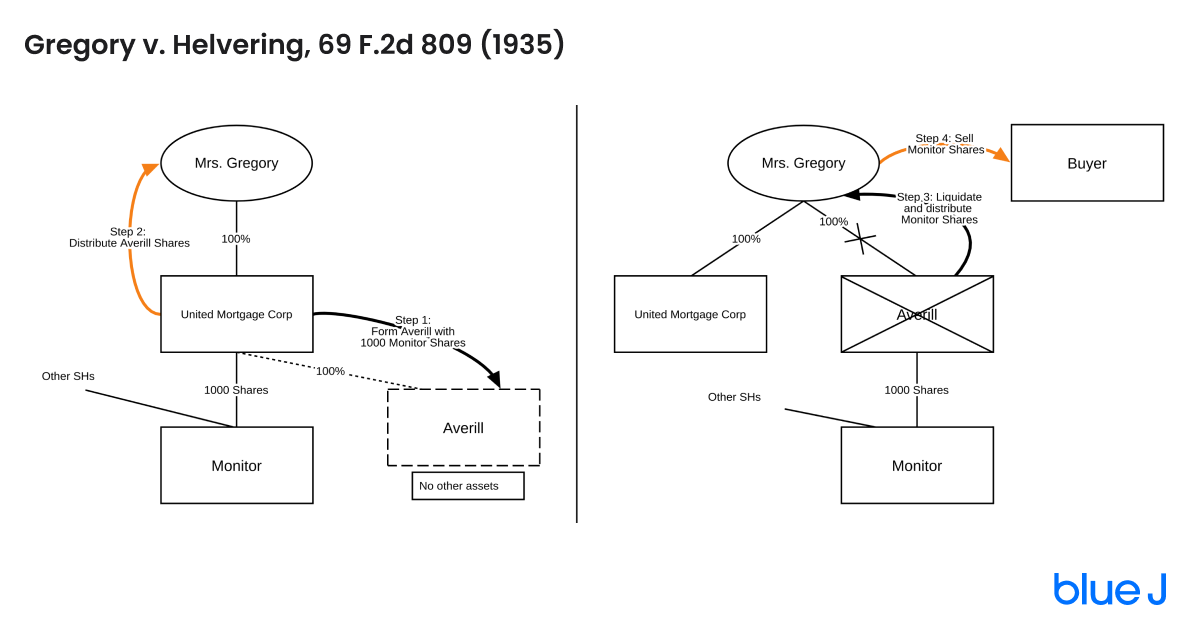 No items found.
Gregory v. Helvering, 69 F.2d 809 (1935)
In Gregory v. Helvering, 69 F.2d 809 (1935), the Supreme Court held against a taxpayer in a purported reorganization (spin-off under former Code) due to lack of business purpose, noting that the transaction was "in fact an elaborate and devious form of conveyance masquerading as a corporate reorganization, and nothing else."

SUPREME COURT OF THE UNITED STATES

CERTIORARI TO THE CIRCUIT COURT OF APPEALS FOR THE SECOND

CERTIORARI /*/ to review a judgment reversing a decision of the

1. A corporation wholly owned by a taxpayer transferred 1000

a new corporation, which thereupon issued all of its shares to the

taxpayer. Within a few days the new corporation was dissolved and was

liquidated by the distribution of the 1000 shares to the taxpayer, who

immediately sold them for her individual profit. No other business was

transacted, or intended to be transacted, by the new corporation. The

of 1928 as a "reorganization," but for the sole purpose of

transferring the shares in question to the taxpayer, with a resulting

transfer by way of dividend. Held: while the plan conformed

to the terms of the statute, there was no reorganization within the

2. By means which the law permits, a taxpayer has the right to

decrease the amount of what otherwise would be his taxes, or

3.The rule which excludes from consideration the motive of tax

avoidance is not pertinent to the situation here, because the

transaction upon its face lies outside the plain intent of the

Browne, and Charles A. Roberts were on the brief, for petitioner.

Wideman and Messrs. Sewall Key and Norman D. Keller were on the brief,

By leave of Court, briefs of amici curiae were filed by Messrs.

MR. JUSTICE SUTHERLAND delivered the opinion of the Court.

Petitioner in 1928 was the owner of all the stock of United Mortgage Corporation. That corporation held among its assets 1,000 shares of the Monitor Securities Corporation. For the sole purpose of procuring a transfer of these shares to herself in order to sell them for her individual profit, and, at the same time, diminish the amount of income tax which would result from a direct transfer by way of dividend, she sought to bring about a "reorganization" under Section 112 (g) of the Revenue Act of 1928, c. 852, 45 Stat. 791, 818, set forth later in this opinion. To that end, she caused the Averill Corporation to be organized under the laws of Delaware on September 18, 1928. Three days later, the United Mortgage Corporation transferred to the Averill Corporation the 1,000 shares of Monitor stock, for which all the shares of the Averill Corporation were issued to the petitioner. On September 24, the Averill Corporation was dissolved, and liquidated by distributing all its assets, namely, the Monitor shares, to the petitioner. No other business was ever transacted, or intended to be transacted, by that company. Petitioner immediately sold the Monitor shares for $ 133,333.33. She returned for taxation as capital net gain the sum of $ 76,007.88, based upon an apportioned cost of $ 57,325.45. Further details are unnecessary. It is not disputed that if the interposition of the so-called reorganization was ineffective, petitioner became liable for a much larger tax as a result of the transaction.

The Commissioner of Internal Revenue, being of opinion that the reorganization attempted was without substance and must be disregarded, held that petitioner was liable for a tax as though the United corporation had paid her a dividend consisting of the amount realized from the sale of the Monitor shares. In a proceeding before the Board of Tax Appeals, that body rejected the commissioner's view and upheld that of petitioner. 27 B. T. A. 223. Upon a review of the latter decision, the circuit court of appeals sustained the commissioner and reversed the board, holding that there had been no "reorganization" within the meaning of the statute. 69 F.2d 809. Petitioner applied to this court for a writ of certiorari, which the government, considering the question one of importance, did not oppose. We granted the writ.

Section 112 of the Revenue Act of 1928 deals with the subject of gain or loss resulting from the sale or exchange of property. Such gain or loss is to be recognized in computing the tax, except as provided in that section. The provisions of the section, so far as they are pertinent to the question here presented, follow:

-- If there is distributed, in pursuance of a plan of reorganization,

to a shareholder in a corporation a party to the reorganization, stock

the reorganization, without the surrender by such shareholder of stock

or securities in such a corporation, no gain to the distributee from

the receipt of such stock or securities shall be recognized. . . .

"(i) Definition of reorganization. -- As used in this

It is earnestly contended on behalf of the taxpayer that since every element required by the foregoing subdivision (B) is to be found in what was done, a statutory reorganization was effected; and that the motive of the taxpayer thereby to escape payment of a tax will not alter the result or make unlawful what the statute allows. It is quite true that if a reorganization in reality was effected within the meaning of subdivision (B), the ulterior purpose mentioned will be disregarded. The legal right of a taxpayer to decrease the amount of what otherwise would be his taxes, or altogether avoid them, by means which the law permits, cannot be doubted. United States v. Isham, 17 Wall. 496, 506; Superior Oil Co. v. Mississippi, 280 U.S. 390, 395-6; Jones v. Helvering, 63 App. D. C. 204; 71 F.2d 214, 217. But the question for determination is whether what was done, apart from the tax motive, was the thing which the statute intended. The reasoning of the court below in justification of a negative answer leaves little to be said.

When subdivision (B) speaks of a transfer of assets by one corporation to another, it means a transfer made "in pursuance of a plan of reorganization" [Section 112(g)] of corporate business; and not a transfer of assets by one corporation to another in pursuance of a plan having no relation to the business of either, as plainly is the case here. Putting aside, then, the question of motive in respect of taxation altogether, and fixing the character of the proceeding by what actually occurred, what do we find? Simply an operation having no business or corporate purpose -- a mere device which put on the form of a corporate reorganization as a disguise for concealing its real character, and the sole object and accomplishment of which was the consummation of a preconceived plan, not to reorganize a business or any part of a business, but to transfer a parcel of corporate shares to the petitioner. No doubt, a new and valid corporation was created. But that corporation was nothing more than a contrivance to the end last described. It was brought into existence for no other purpose; it performed, as it was intended from the beginning it should perform, no other function. When that limited function had been exercised, it immediately was put to death.

In these circumstances, the facts speak for themselves and are susceptible of but one interpretation. The whole undertaking, though conducted according to the terms of subdivision (B), was in fact an elaborate and devious form of conveyance masquerading as a corporate reorganization, and nothing else. The rule which excludes from consideration the motive of tax avoidance is not pertinent to the situation, because the transaction upon its face lies outside the plain intent of the statute. To hold otherwise would be to exalt artifice above reality and to deprive the statutory provision in question of all serious purpose.

/*/ See Table of Cases Reported in this volume.

END OF FOOTNOTE TO OPINION