In Rev. Rul. 77-191, the IRS applies § 368(a)(1)(D) and § 355 tax treatment to an indirect spin where a corporation distributed an ATB to its shareholders, who immediately contributed it to a new corporation.
Start a Diagram 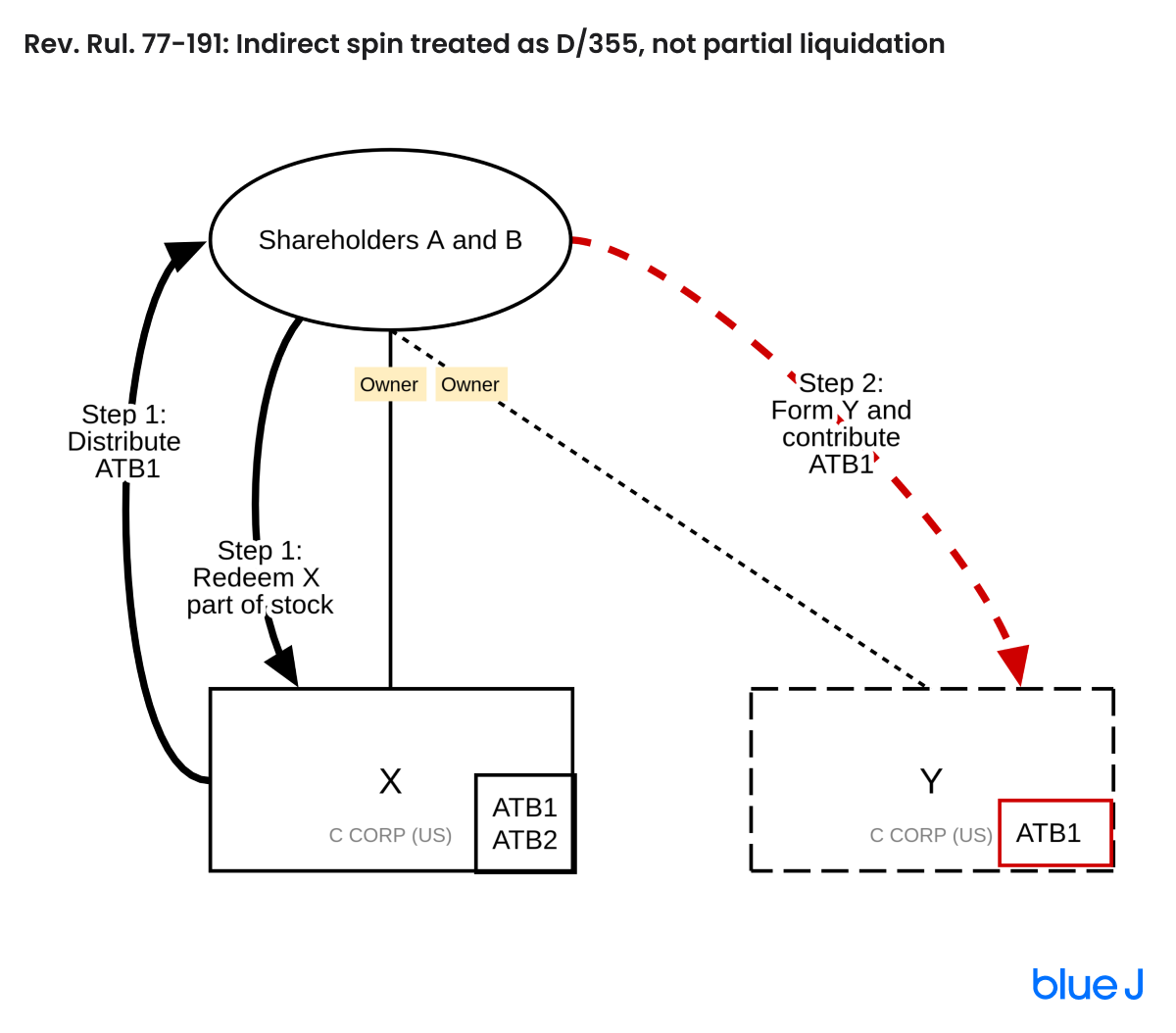 Section 331(a)(2) of the Code provides that amounts distributed in partial liquidation of a corporation (as defined in section 346) shall be treated as in part or full payment in exchange for the stock.

Section 1.331-1(c) of the Income Tax Regulations provides that a liquidation that is followed by a transfer to another corporation of all or part of the assets of the liquidating corporation or which is preceded by such a transfer may have the effect of the distribution of a dividend or of a reorganization in which no loss is recognized and gain is recognized only to the extent of "other property."

Section 355(a) of the Code provides that if (1) a corporation distributes to its shareholders, with respect to its stock, solely the stock of a corporation that it controlled immediately before the distribution, (2) the transaction is not used principally as a device for the distribution of earnings and profits, and (3) the requirements of section 355(b) (relating to active businesses) are satisfied, no gain or loss will be recognized to the shareholders.

The tax consequences of a business transaction are properly determined by the substance of the transaction and not by the form in which it is cast. A transaction must be viewed as a whole. The true nature of a transaction cannot be disguised by mere formalisms that exist solely to alter tax liabilities. Commissioner v. Court Holding Co., 324 U.S. 331 (1945), 1945 C.B. 58.

In Gregory v. Helvering, 293 U.S. 465 (1935), XIV-1 C.B. 193 (1935), wherein a transaction was held not to qualify as a reorganization even though it satisfied the express provisions of the statute, The Supreme Court of the United States stated, in part, that the issue is "whether what was done, apart from the tax motive, was the thing which the statute intended."

Section 331 of the Code was not intended to apply to a divisive transaction wherein, for business reasons, a single corporation is split into two or more corporations each owned by the shareholders of the original corporation. Under these circumstances, section 355 is the governing provision. See Commissioner v. Baan, 382 F. 2d 485 (9th Cir. 1967) aff'd, 391 U. S. 83 (1968).

In Stephens, Inc. v. United States, 464 F.2d 53 (8th Cir. 1972), cert. denied, 409 U.S. 1118 (1973), the taxpayer was part owner of a public utility company. The utility company was liquidated and its assets were transferred to two new corporations formed to carry on the public utility functions of the old company. One of the new corporations performed water services and the other new corporation performed three other services. The taxpayer and the other owners of the old company became the owners of the two new companies. The court held that the transaction was a split-up described in sections 368(a)(1)(D) and 355 of the Code rather than a complete liquidation taxable under section 331(a)(1).

Similarly, this transaction was not a partial liquidation but was a corporate reorganization. The end result of the planned series of steps was precisely the same as if X had created Y as a wholly owned subsidiary, transferred the assets of the warehouse distribution business to Y, and then distributed the stock of Y pro rata to A and B in exchange for part of their X stock. Such a series of steps is a typical corporate split-off described in sections 368(a)(1)(D) and 355 of the Code.

Accordingly, the transaction in the instant case is not a partial liquidation to which section 331(a)(2) of the Code applies. The distribution of the assets of the warehouse distribution business to A and B and the incorporation of those assets in Y is a reorganization under section 368(a)(1)(D). Pursuant to section 355(a)(1), no gain or loss is recognized to A and B. Under section 358(a), A and B have bases in their Y stock equal to their former bases in the X stock surrendered in the transaction. Under section 362(b), the basis to Y of the property formerly held by X is the same as the basis of that property in the hands of X immediately prior to the transaction. As provided in section 312(h), the earnings and profits of X are allocated between X and Y in accordance with section 1.312-10 of the regulations.

The holding that section 355(a)(1) of the Code applies to this transaction is premised on the assumption that the transaction was not used principally as a device for the distribution of the earnings and profits of X or Y or both.