In Rev. Rul. 70-18, the IRS holds that a distribution qualified under § 355 despite the fact that the requisite control was acquired through the merger of sister/brother corporations.
Start a Diagram 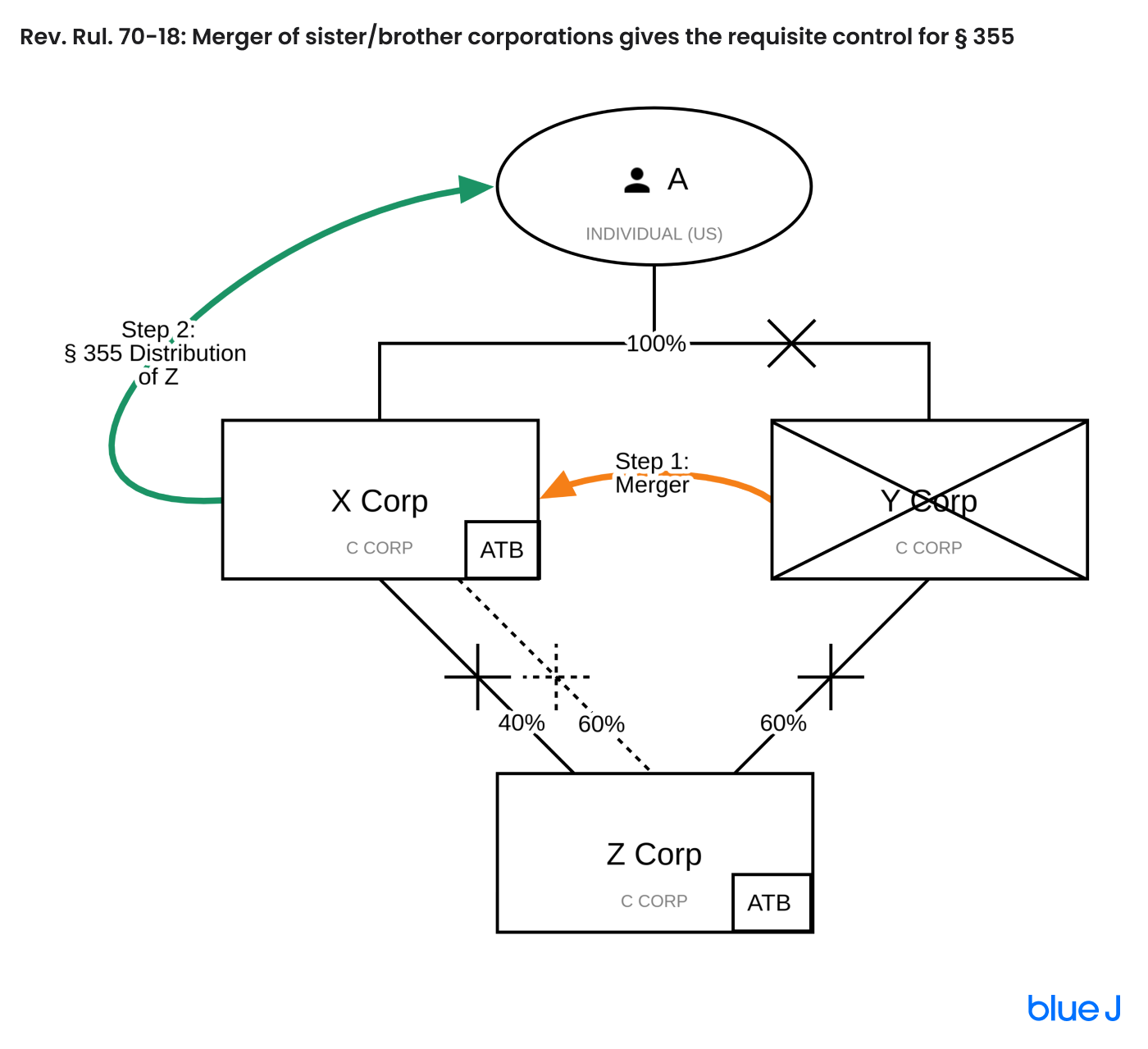 No items found.
Rev. Rul. 70-18: Inter-group reorganization satisfies § 355 control
In Rev. Rul. 70-18, the IRS holds that a distribution qualified under § 355 despite the fact that the requisite control was acquired through the merger of sister/brother corporations.

Rev. Rul. 70-18Advice has been requested whether the distribution by a corporation to its sole shareholder of the common stock of another corporation, under the circumstances described below, qualifies as a nontaxable distribution under section 355 of the Internal Revenue Code of 1954.

Due to state regulations applicable to insurance underwriters, it became necessary to eliminate X's ownership of Z's stock. At approximately the same time, the building that housed the business of Y was condemned by the state and Y's insurance business was moved into X's facilities.

After the consolidation of Y's activities into X's facilities, a plan was adopted whereby Y was merged into X in accordance with state law. No gain or loss was recognized to A, X or Y on the merger. Immediately thereafter X distributed all the outstanding stock of Z to A to comply with state regulations concerning insurance underwriters. Thereafter, X and Z continued to actively conduct their respective businesses.

Section 355(a) of the Code provides, in part, that no gain or loss shall be recognized if (1) a corporation distributes to a shareholder, with respect to its stock, solely stock of a corporation which it controls immediately before the distribution, (2) the transaction was not used principally as a device for the distribution of earnings and profits, and (3) the requirements of subsection (b) of section 355 of the Code (relating to active businesses) are satisfied. Subsection (b) provides in part that control of the corporation the stock of which is distributed cannot have been acquired within the five-year period preceding the distribution unless it was acquired within such period by reason of a transaction in which gain or loss was not recognized in whole or in part.

Section 1.355-2(c) of the Income Tax Regulations provides, in part, that the application of section 355 of the Code is limited to certain specified distributions with respect to the stock or securities of controlled corporations incident to such readjustment of corporate structures as is required by business exigencies and which, in general, effect only a readjustment of continuing interests in property under modified corporate forms. Section 355 of the Code contemplates a continuity of the entire business enterprise under modified corporate forms and a continuity of interest in all or part of such business enterprise on the part of those persons who, directly or indirectly, were the owners of the enterprise prior to the distribution.

Section 1.355-4(b)(1) of the regulations provides that if control of the active trade or business was acquired within the five-year period, it must have been acquired in a transaction in which gain or loss was not recognized.

In the instant case, sufficient business reasons existed to establish the validity of the merger as having a substantial business purpose other than to gain the control required to effect the spin-off. Prior to the transactions A owned all of the outstanding shares of X and Y directly and all of the Z shares indirectly. After the transaction A owned all the shares of the merged corporations directly and all the shares of Z directly.

In this case, control of Z was acquired within the five-year period preceding the distribution in a transaction in which no gain or loss was recognized as provided by section 1.355-4(b)(1) of the regulations. There was a continuity of the entire business enterprise under modified corporate form and a continuity of interest therein by those persons who, directly or indirectly, were the owners of the enterprise prior to the exchange and distribution. 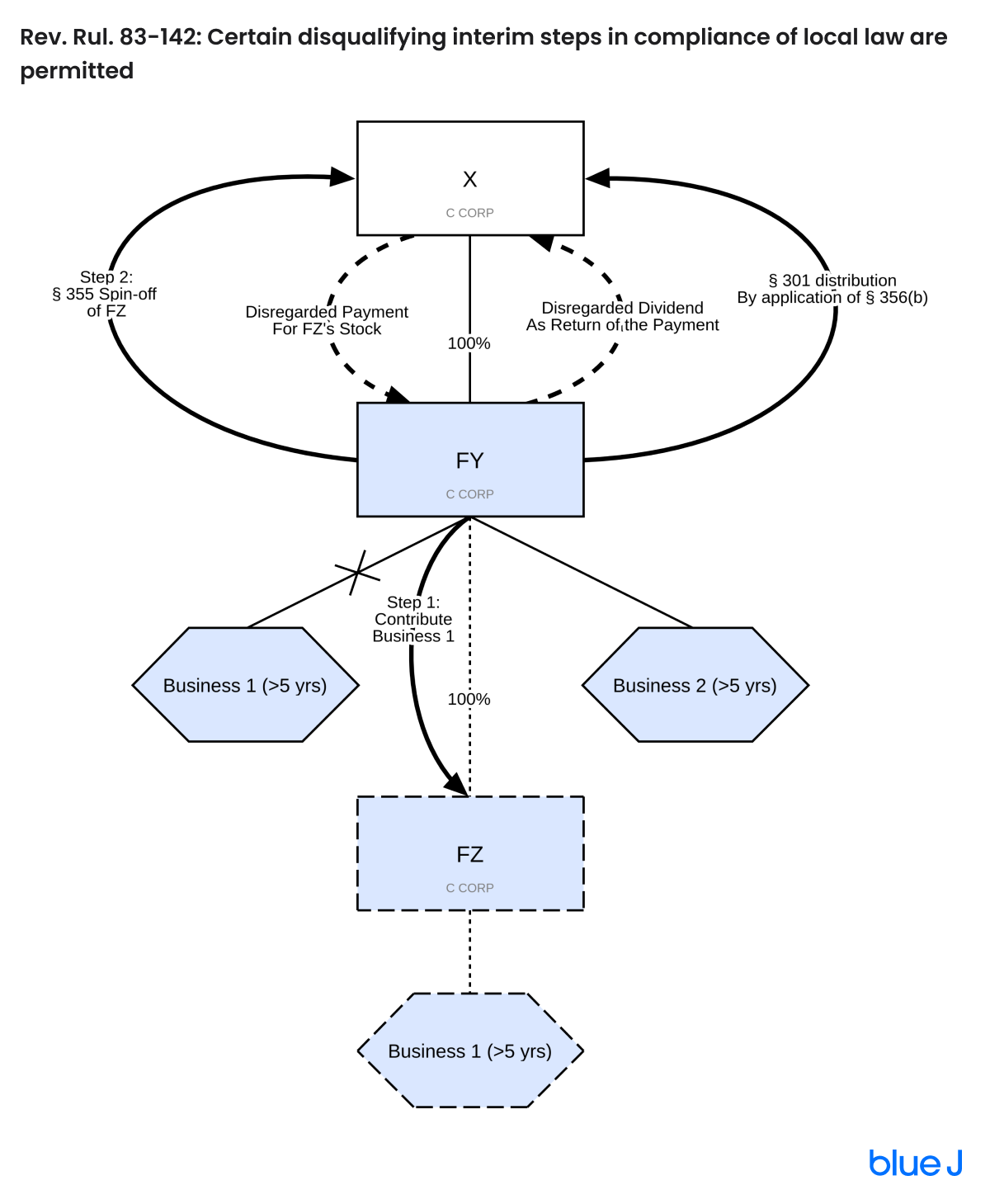 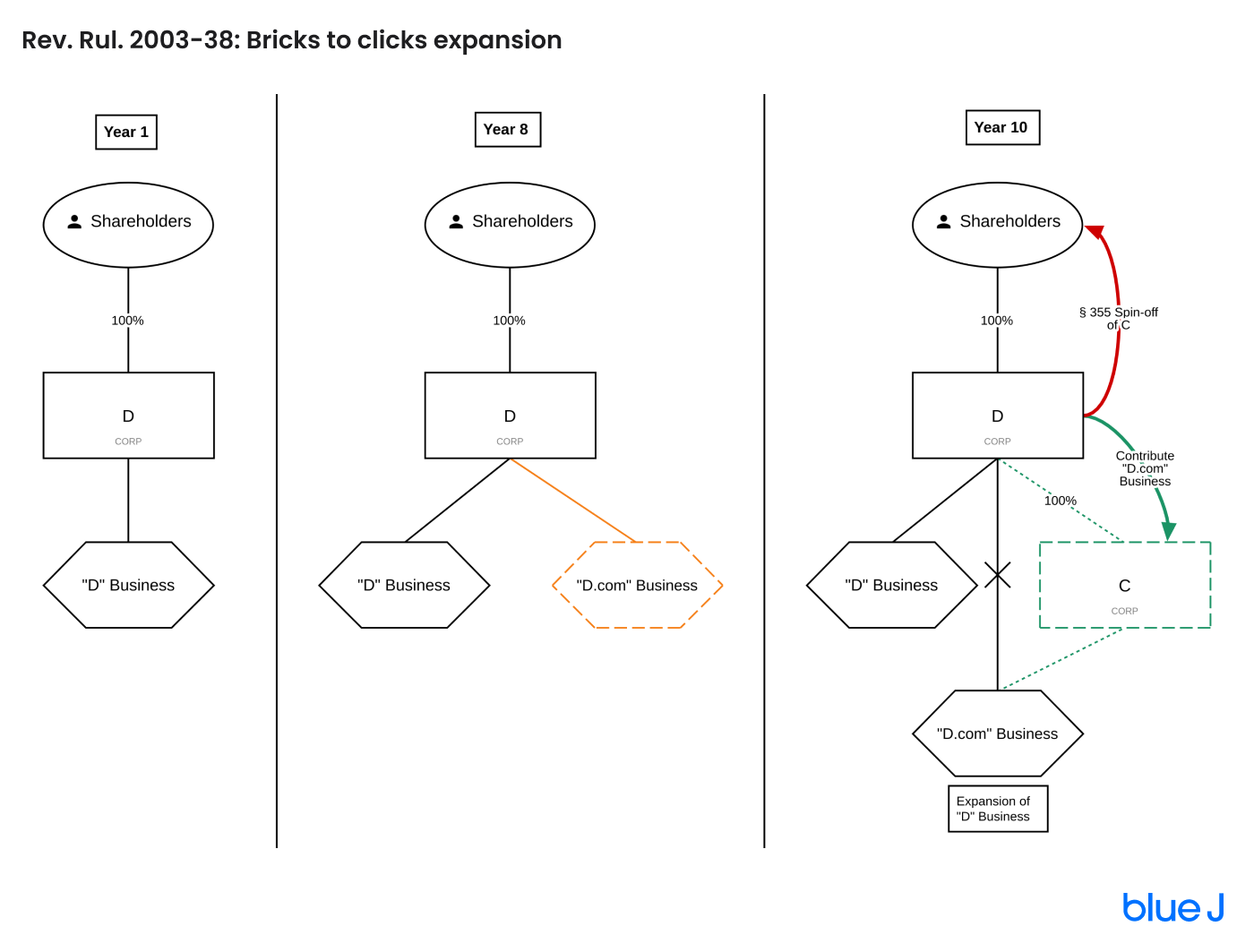 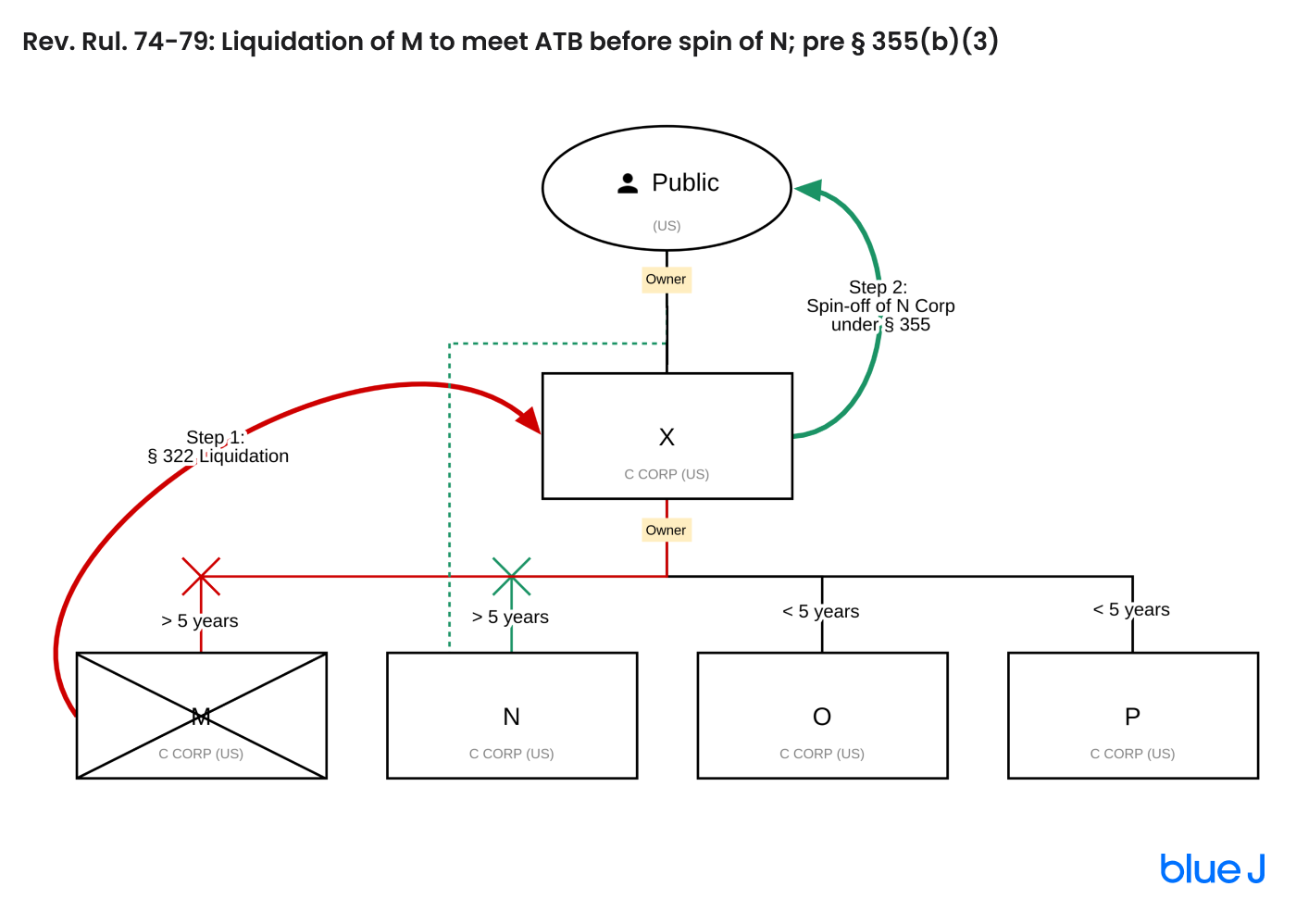