In Rev. Rul. 62-138, the IRS holds that a successive distribution of the stock of a controlled subsidiary in successive spins did not violate the continuity of interest requirement.
Start a Diagram 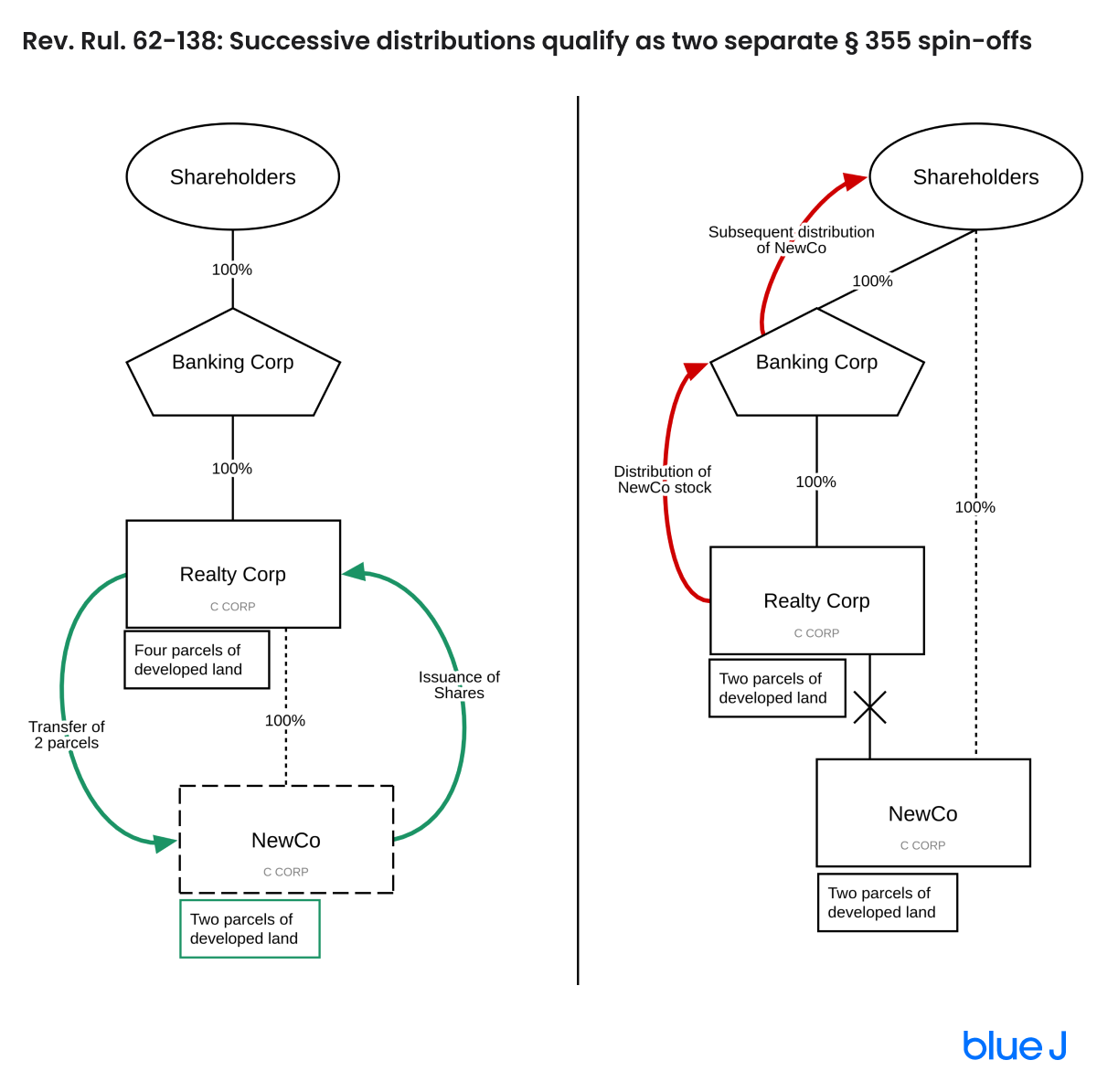 No items found.
Rev. Rul. 62-138: § 351(c) applied in context of § 355 spin-offs
In Rev. Rul. 62-138, the IRS holds that a successive distribution of the stock of a controlled subsidiary in successive spins did not violate the continuity of interest requirement.

Rev. Rul. 62-138 Advice has been requested whether, under a single plan, successive distributions of the stock of a corporation, first by a subsidiary to its parent corporation and then by the parent corporation to its shareholders, come within the purview of section 355 of the Internal Revenue Code of 1954.

A banking corporation, actively engaged in the banking business for a period of more than five years, also owned all of the outstanding stock of a realty corporation acquired more than five years ago. The realty corporation owned and operated four parcels of developed realty which it used in the active conduct of several rental businesses for a period of more than five years. Two of these parcels are contiguous and the buildings thereon, being physically connected, are operated as an integrated unit. The banking corporation has its offices on the first floor of one of these buildings; the other floors, some ten in all, are leased to business and professional concerns. The remaining two parcels are located in other areas of the same city and contain residential apartment buildings. These two parcels were operated as a separate rental business.

Section 351 of the Code provides, in substance, that no gain or loss will be recognized on the transfer of property to a transferee corporation solely in exchange for its stock or securities where the transferor is in `control' of the corporation immediately after the transfer. Section 351(c) of the Code provides that, in determining control, the fact that any corporate transferor distributes part or all of the stock which it receives in the exchange to its shareholders shall not be taken into account.

Section 355(b)(2) of the Code provides, in substance, that a corporation is deemed to be engaged in the active conduct of a trade or business if such trade or business has been actively conducted by such corporation throughout the five-year period preceding the distribution or, during that period, was not acquired, directly or indirectly through use of other corporations, in a transaction in which gain or loss was recognized in whole or part.

Section 1.355-2(c) of the Income Tax Regulations provides, in part, that the application of section 355 is limited to certain specified distributions with respect to the stock or securities of controlled corporations incident to such readjustment of corporate structures as is required by business exigencies and which, in general, effect only a readjustment of continuing interests in property under modified corporate forms. Section 355 contemplates a continuity of the entire business enterprise under modified corporate forms and a continuity of interest in all or part of such business enterprise on the part of those persons who, directly or indirectly, were the owners of the enterprise prior to the distribution.

In the instant case the transfer of the two apartment buildings to the newly created subsidiary in exchange for all of its stock is within the purview of section 351 of the 83d Cong., 2d Sess., 265 (1954). even though the transferor corporation distributed, as part of an integrated transaction, all or part of the shares received in the exchange to its shareholders. Moreover, it is immaterial whether such distribution is taxable or nontaxable. See Senate Report No. 1622, 83dd Cong., 2d Sess., 265 (1954).

Under the facts of this case, the successive distributions are each within the purview of section 355 of the Code. In each case, the active business requirement of that section is satisfied and the final result both in respect to corporate separation and the distribution of the stock, is justified by valid business purpose prompting the transaction. Thus, the remaining question is whether the transaction, when viewed as a whole, meets the continuity-of-interest requirements of section 355 of the Code.

Section 355 of the Code specifically permits the pro rata distribution of the stock of a subsidiary tax-free under certain circumstances. In other words, it permits the removal of one corporate entity between the shareholders and the business enterprise conducted by a controlled subsidiary. Thus, the statute looks through corporate entities to the underlying economic activities to permit a division of separate corporate businesses in realistic terms rather than in terms of a single corporate entity. In line with this approach, section 1.355-2 of the regulations provides, in part, that the continuity of interest contemplated is a continuity of ownership by those persons who, directly or indirectly, were the owners of the enterprise prior to the distribution.