In Rev. Rul. 2003-79, the IRS distinguished the Elkhorn Coal limitation and allowed a § 355 spin-off of a wanted division through transfer to a new corporation followed by the acquisition of the new corporation by an unrelated purchaser to qualify as a valid Type C reorganization.
Start a Diagram 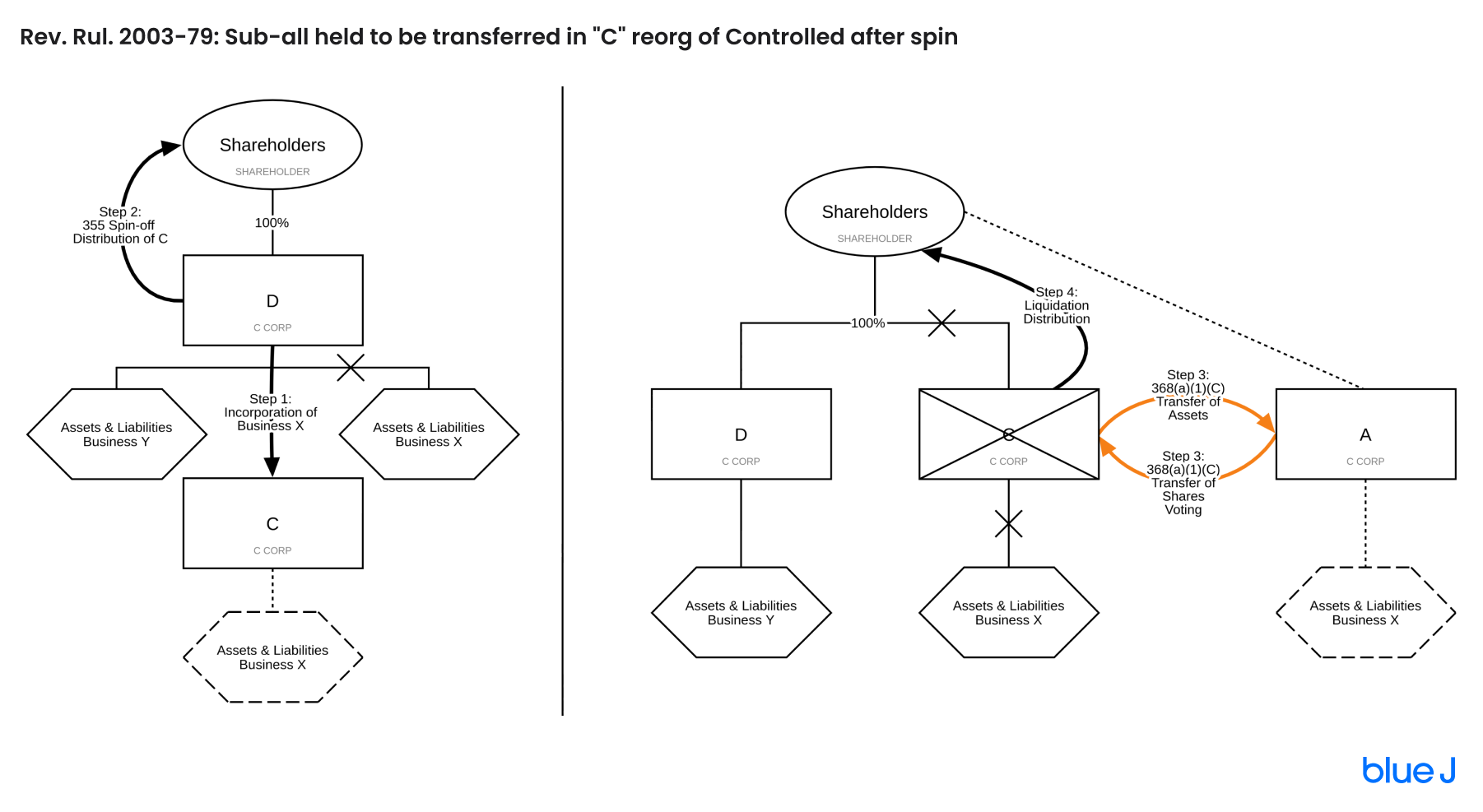 No items found.
Rev. Rul. 2003-79: Sub-all transferred in C reorg of spun Controlled
In Rev. Rul. 2003-79, the IRS distinguished the Elkhorn Coal limitation and allowed a § 355 spin-off of a wanted division through transfer to a new corporation followed by the acquisition of the new corporation by an unrelated purchaser to qualify as a valid Type C reorganization.

[4] Section 355 provides that if certain requirements are met, a corporation may distribute stock and securities in a controlled corporation to its shareholders and security holders without causing the distributees to recognize gain or loss.

[5] Section 368(a)(1)(C) defines a reorganization to include the acquisition by one corporation, in exchange solely for all or a part of its voting stock, of substantially all of the properties of another corporation.

[7] In Helvering v. Elkhorn Coal Co., 95 F.2d 732 (4th Cir. 1937), cert. denied, 305 U.S. 605, reh'g denied, 305 U.S. 670 (1938), Elkhorn Coal, in anticipation of being acquired by Mill Creek, transferred part of its operating assets to a newly formed subsidiary and distributed the subsidiary's stock to Elkhorn Coal's shareholders. The court concluded that the distribution of subsidiary stock prevented the subsequent acquisition from qualifying under a predecessor of § 368(a)(1)(C) because, as a result of the distribution, Mill Creek did not acquire substantially all of Elkhorn Coal's historical assets.

[8] In Commissioner v. Mary Archer W. Morris Trust, 367 F.2d 794 (4th Cir. 1966), aff'g 42 T.C. 779 (1964), the taxpayer, in anticipation of a merger with a national bank, contributed its insurance business to a new subsidiary and distributed the subsidiary's stock to its shareholders. The divestiture was necessary to comply with national banking laws. The court held that the distribution satisfied the requirements for nonrecognition under § 355(a) and, therefore, that the contribution qualified as a reorganization under § 368(a)(1)(D).

[11] The Conference Report accompanying the 1997 Act states, in part, that:

[13] The Senate Report accompanying the 1998 Act contains three examples in which distributing corporation D transfers appreciated business X to newly created subsidiary C in exchange for at least 85 percent of the C stock and then distributes its C stock to the D shareholders. As part of the same plan, C then merges into unrelated acquiring corporation A. Each example concludes that if the distribution satisfies the requirements of § 355, the control immediately after requirement will be satisfied solely for purposes of determining the tax treatment of the transfer of business X by D to C. See S. Rep. No. 105-174, at 173-176 (1998); 1998-3 C.B. 537, at 709-712.

[15] Hence, the acquisition by A of all the properties held by C immediately after the distribution will satisfy the requirement of § 368(a)(1)(C) that A acquire substantially all the properties of C. This result obtains even though an acquisition by A of the same properties from D would have failed this requirement if D had retained Business X, contributed Business Y to C, and distributed the stock of C. See Helvering v. Elkhorn Coal Co., supra.

[17] The principal author of this revenue ruling is Gene Raineri of the Office of Associate Chief Counsel (Corporate). For further information regarding this revenue ruling, please contact Mr. Raineri at (202) 622-7530 (not a toll-free call).